New York City – Hani Hajir has cooked his entire life. Watching his customers eat at the halal restaurant he owns in Brooklyn is what brings him joy. But the current coronavirus pandemic lockdown has robbed him of this simple pleasure for more than a month.

He closed shop on March 30, less than two weeks after New York City shut down to contain the spread of the virus. Hajir was worried that he would be exposed to the disease, given that he was the one who interacted with customers the most. Moreover, the business took a hit given the neighbourhood is primarily made of factories and warehouses – a workforce that has all but disappeared since the pandemic began.

Hajir said he had become depressed under the lockdown. He is not alone. Muslim community leaders in New York City said the lack of community activities and inability to pray and break fast together during the holy month of Ramadan has hit the community hard.

But Hajir, like many Muslims across the United States, has found new ways to observe Ramadan, including practising community and charity despite the lockdowns and quarantines.

Hajir has teamed up with the Muslim Community Center (MCC) in Brooklyn to provide food to homeless individuals.

Hajir prepares food in his restaurant every day to give to MCC for deliveries. Mohammed Bahi, director of MCC, then brings the meals to a location in Manhattan to share them with the members from the homeless community.

Even though the MCC has been involved with feeding the homeless community since 2014, Bahi said that this time the spirit is different. MCC has seen nearly double the number of people who normally show up during their Ramadan food drives.

Jeff Perrington, who has previously experienced homelessness and currently works as a liaison for the MCC and the homeless community, agrees that the number of those seeking food assistance this year is on the rise.

“Things have gotten more catastrophic,” he said. In April, New York City Mayor Bill de Blasio shared concerns that food insecurity in the city had doubled during the pandemic, with the city’s homeless population especially vulnerable.

MCC’s food drive for the homeless community runs about six blocks in Manhattan, according to Perrington, with volunteers making sure social distancing measures are in place. MCC’s initiative also provides masks, gloves, sanitisers as well as other hygiene products.

A new ‘tool’ to strengthen faith

Beyond serving the community, the initiative also offers the volunteers some respite from being in the confines of their home.

New York City is home to approximately 768,767 Muslims, scattered across all five boroughs.
For many who attend the MCC, Bahi said the mosque, now temporarily closed, was the “number-one tool” for them to strengthen their faith and beliefs, especially during Ramadan.

“We lost that tool, [and] everyone is going around trying to replace it, and we thought this is the best way [to do so],” Bahi said.

MCC’s initiative also has support from other organisers and facilities, namely the Asiyah Women’s Shelter, the only domestic violence shelter in New York geared towards Muslim women that is under the umbrella of Muslims Giving Back, a volunteer-run group that’s a part of MCC. 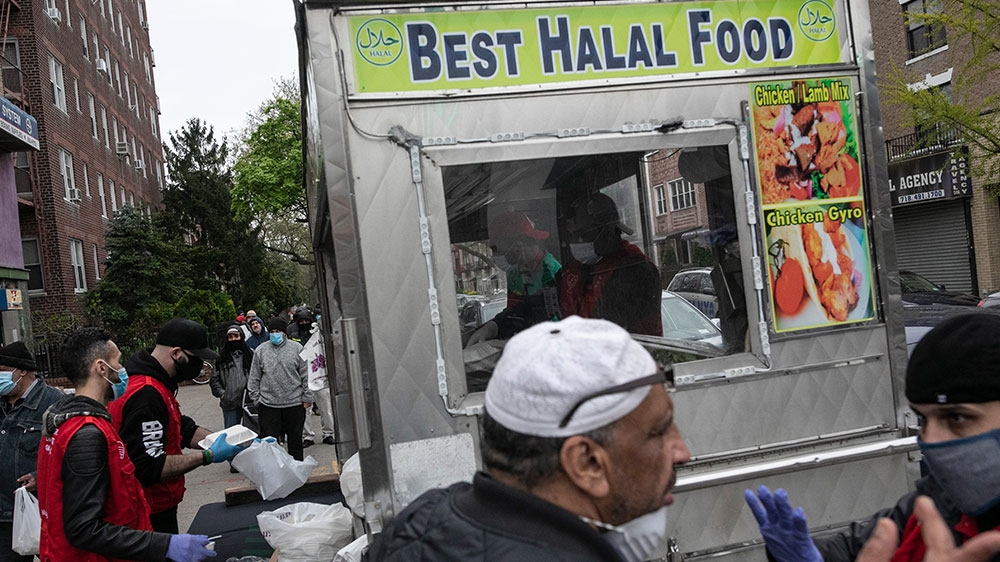 People queue up for free food handed out by volunteers from Muslims Giving Back, in red vests, in the Bay Ridge neighbourhood of Brooklyn [Wong Maye-E/AP Photo]

Dania Darwish, the executive director of Asiyah, said volunteering with these activities provides the centre’s residents with an opportunity for a mental break from the circumstances they’re processing. They assist with preparing and packaging the meals that Bahi carries to Manhattan every night.

Many of the survivors at the centre, she says, were very close to their families, and not being together at this time has made the current isolation particularly challenging.

But they’re now using this volunteer opportunity to fill the absence, while also giving back to the community, she said.

‘A time for action’

Other initiatives have also popped up across the city. The New York Police Department Muslim Officers Society says every year they organise a massive iftar celebration for the community at the police headquarters.

Given that that is not possible this year, they are now organising a troop of four halal food carts that are providing free meals to New Yorkers between 5pm and 8pm.

Adeel Rana, president of the society, estimates that there are about 1,000 people who show up to the carts every day.

Three of the carts are stationed in specific neighbourhoods across the city, while one does rotations.

The meals are served during the time of iftar, but Rana said they are open to everyone. “When you serve our community, it means you’re serving anybody that also belongs in our community,” he said.

The food carts belong to Zakarya Khan, who owns a halal restaurant, Gyro King, that operates through different carts and branches in the city. 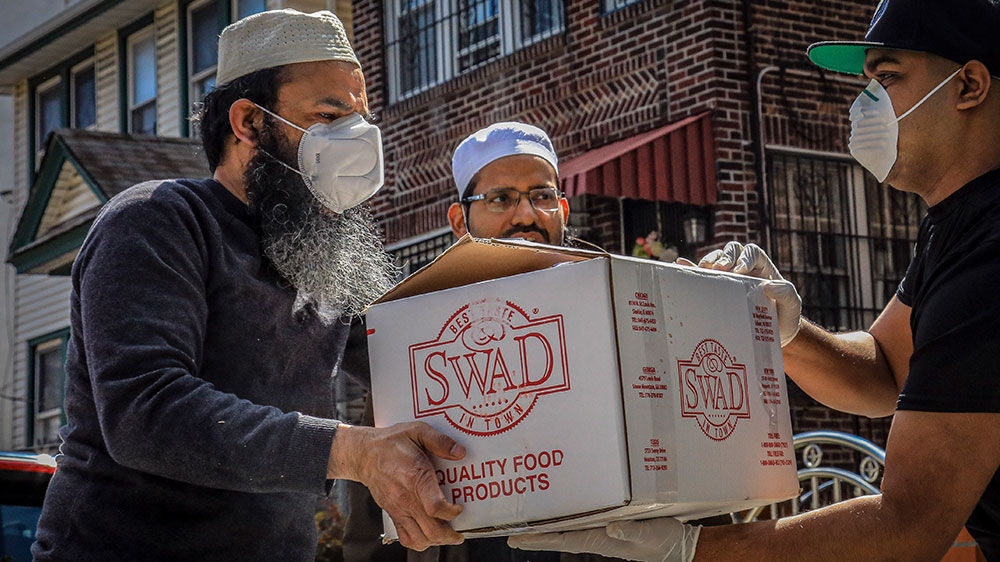 As soon as the shutdown began, Khan had to close out the carts, and those that ran the carts were suddenly unemployed.

The initiative to offer free meals is now helping fill this gap, as well, as Khan immediately hired back those who were working the cart shift.

As for Bahi, he said the volunteer work is helping people recreate the idea of praying together – just in a different way.