Here are the latest updates.

The International Red Cross and Red Crescent Movement and the International Council of Nurses are calling on governments to commit to ensuring the protection and safety of nurses and other health workers, especially in resource-poor, disaster and conflict settings.

The organisations say healthcare workers’ health and safety is vital for a “competent” medical response during the coronavirus pandemic.

“The pandemic has seen frontline nurses rightly recognised as heroes, but they are also ordinary mothers and fathers with their own families to protect,” International Council of Nurses President Annette Kennedy said in a joint statement issued by the organisations. “They deserve to be able to work free from fear, whether because of a lack of PPE or because of harassment and attack.”

We’ve reported previously on the stigma faced by medical workers in the Philippines. Read that story here. May 12 is International Nurses Day. 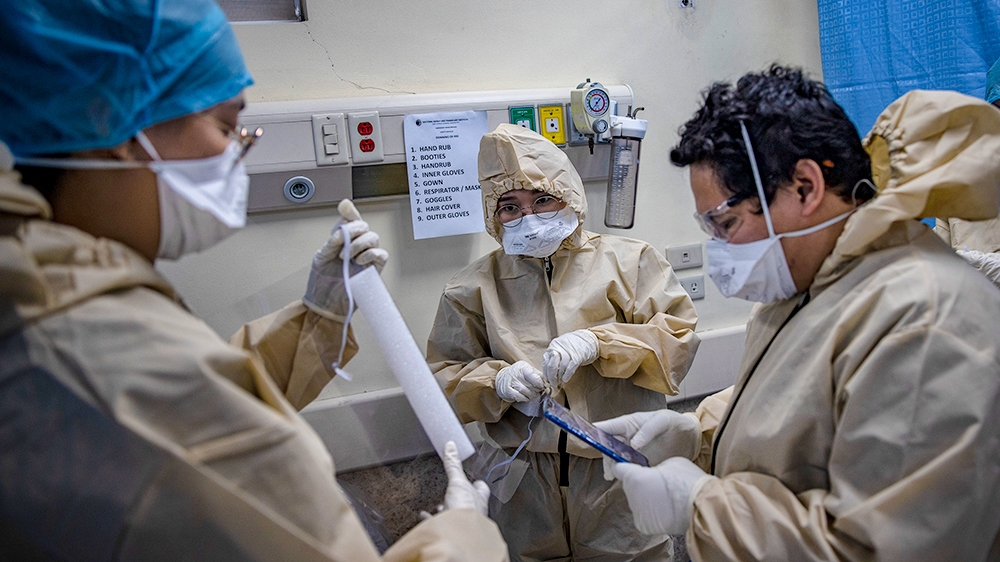 Health workers don protective clothing before treating patients at a COVID-19 isolation facility in Manila. Some nurses and doctors in the country say they have been abused or forced from their homes as a result of their work [Ezra Acayan/Getty Images]

02:55 GMT – Trump stomps out of media briefing after ‘racist’ exchange

US President Donald Trump abruptly ended Monday’s coronavirus briefing after a testy exchange with an Asian-American reporter that was denounced by several observers, including other journalists, as “racist”.

TV network CBS News reporter Weijia Jiang asked Trump why he continued to insist that the US was doing better than other countries when it came to testing for the virus.

His response was to tell her it was a question she should ask China.

Read more on the exchange and the reactions to it here.

.@kaitlancollins allowed me to ask a follow up question after the President called on her, and then @Yamiche deferred to Kaitlin. I am fortunate to work alongside them. https://t.co/aG1F3xYIQO

The international community’s attempts to forge a global ceasefire to help curb the spread of the coronavirus have been a “catastrophic failure”, Oxfam International said in a new report published on Tuesday.

Oxfam said fighting continues across many conflict-torn countries despite a March appeal from United Nations Secretary-General Antonio Guterres for warring sides to lay down their weapons.

“We expected leadership from the Council as well as many of those countries who say they support a ceasefire, but who nevertheless remain active participants in conflicts around the world, conducting military operations, selling arms and supporting third parties,” said Oxfam Interim Executive Director Jose Maria Vera.

Read more on that story here.

02:20 GMT – Iran to re-open mosques from Tuesday for certain nights in Ramadan

All mosques in Iran are to reopen temporarily on Tuesday, the official IRIB news agency reported.

The decision was made in consultation with the ministry of health, IRIB quoted Mohammad Qomi, the director of the Islamic Development Organization, as saying.

Qomi said later on Monday that mosques would only be open for three days commemorating specific nights during Ramadan and it was unclear whether they would stay open, according to the Fars news agency.

The move comes even though some parts of the country have seen a rise in infections.

Indonesia is rolling out “rice ATMs” in a bid to ensure those worst affected by the coronavirus outbreak can get the foods they need to survive.

The vending machines are packed with rations of good-quality rice and operated by magnetic cards.

“Each day we prepare 1.5 tonnes (of rice]) for around 1,000 residents,” said Ibrahim, an army official supervising distribution in a military camp on the outskirts of Jakarta told Reuters. “We will continue doing it every day, without rest, even on weekends, we will distribute non-stop.”

Ten machines have been set up in the capital with daily wage earners, the unemployed, those who do not own a house and people who live below the poverty line eligible for the rations. 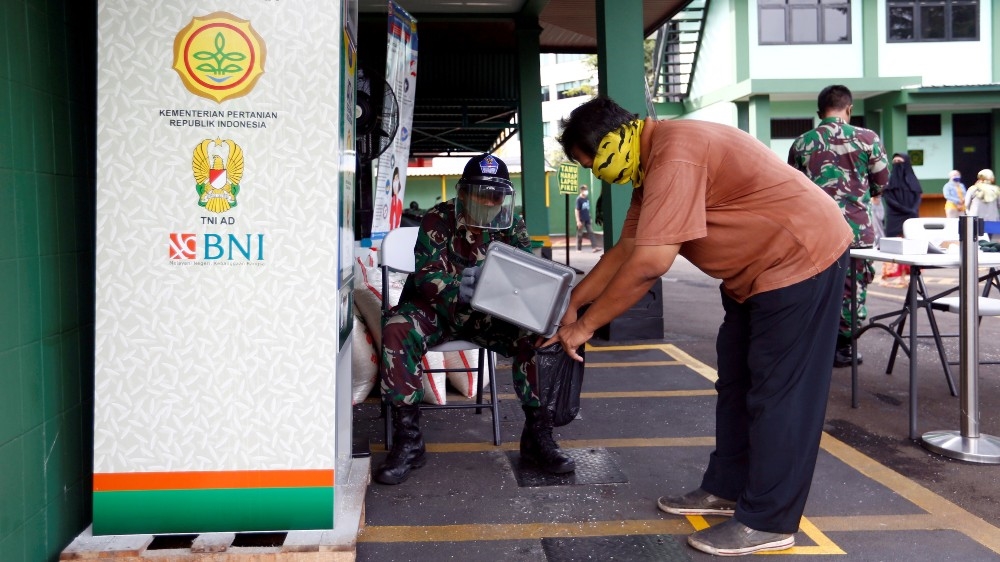 British Prime Minister Boris Johnson has been forced to clarify his government’s plans to ease lockdown measures in the United Kingdom after a pre-recorded speech on Sunday night led to confusion. chaos and parody.

More on that story here.

And the parody – courtesy of comedian and actor Matt Lucas, and now watched millions of times – below.

The World Health Organization chief says there are approximately seven or eight “top” candidates for a vaccine to combat the coronavirus and work on them is being accelerated.

WHO Director-General Ghebreyesus told a UN Economic and Social Council video briefing on Monday the effort to find a vaccine had been helped by the 7.4 billion euros ($8 billion) pledged a week ago by leaders from 40 countries, organisations and banks for research, treatment and testing.

But he added more funds would be needed.

“We have good candidates now,” Tedros said. “The top ones are around seven, eight. But we have more than a hundred candidates.”

“We are focusing on the few candidates we have which can bring probably better results and accelerating those candidates with better potential,” he said.

Tedros did not identify the top candidates.

00:05 GMT – Trump insists his administration has ‘met the moment’ on coronavirus testing

US President Donald Trump is insisting his administration has “met the moment” and “prevailed” on coronavirus testing.

Speaking in the Rose Garden at the White House, Trump reiterated that everyone who wants a test can get one, although officials later clarified that to everyone who “needs” a test.

The White House has now ordered everyone entering the West Wing to wear a mask, after two cases of COVID-19 were confirmed among staff.

Brazilian President Jair Bolsonaro has declared gyms and hair and beauty salons “essential” services allowing them to remain open despite the coronavirus lockdown.

Right-wing Bolsonaro has been a vocal opponent of the lockdowns imposed by state and municipal governments across Brazil despite the mounting number of cases and deaths.

“The question of life has to be taken in parallel with jobs,” Bolsonaro said on Monday outside his official residence. “Without the economy, there is no life, there are no doctors, there are no hospital supplies.”

Read all the updates from yesterday (May 11) here.