US immigration authorities are set to continue deportations to Haiti on Monday, with a flight that is scheduled to have at least 100 people on board, including five individuals who have recently tested positive for the novel coronavirus, according to a US-based rights group.

Among those facing deportation is Stephane Etienne, who first tested positive for COVID-19 on April 17 at the Pine Prairie Immigration and Customs Enforcement (ICE) Processing Center in Louisiana.

He told Al Jazeera in a video call from the detention centre that he tested positive again on April 28 and has not been re-tested since.

Monday’s deportation flight also includes at least four others who have tested positive since April 16 at the Pine Prairie detention centre, according to the Institute for Justice and Democracy in Haiti (IJDH), a Boston-based human rights organisation that has obtained information about this list.

“I don’t know how they can do this,” said Etienne, who maintains that he has never even set foot in Haiti and was born in the US.

Deporting individuals who are known to be infected with the virus violates US and international public health guidelines designed to prevent the spread of the coronavirus.

Dr Jacques Boncy, the director of the Haitian Ministry of Public Health’s national laboratory, said that deporting those who have COVID-19 would also put other passengers on the flight, as well as the crew, and the Haitian population, at risk.

Although Haiti has reported a relatively low number of cases – fewer than 200 – experts fear the actual number is much higher as Haitians who work in the neighbouring Dominican Republic, which has more than 10,000 cases, return home amid lockdown measures.

Haiti’s health system is not equipped to handle an influx of cases, experts warn. 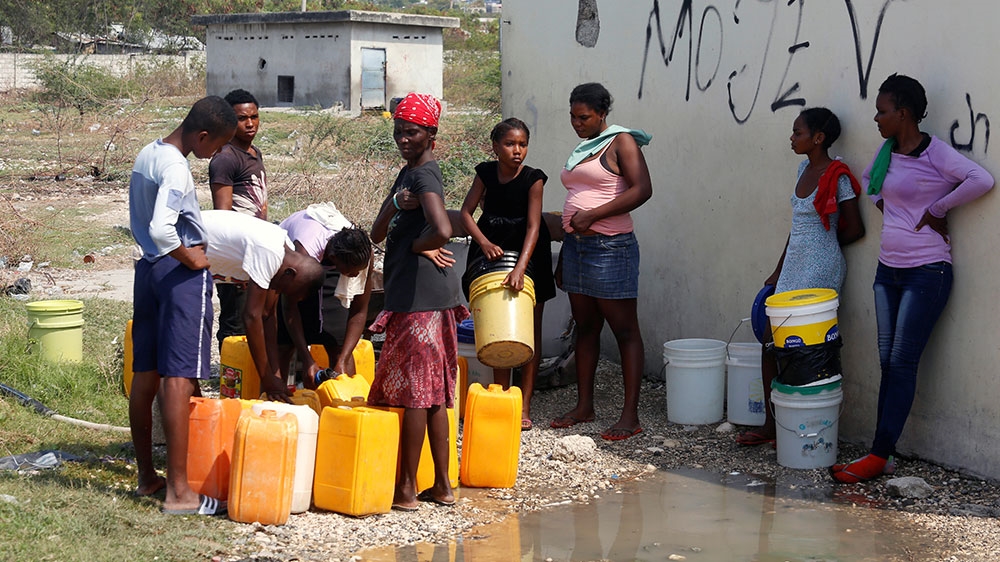 People wait to get water from a communal tap, during an outbreak of the coronavirus disease (COVID-19), in Port-au-Prince, Haiti [Jeanty Junior Augustin/Reuters]

Despite the high risks of COVID-19 infection, ICE generally does not test all detainees for the virus prior to deportation. Etienne is doubtful that he would have been tested at all if he had not insisted that he be given a coronavirus test. Since he first tested positive for the coronavirus, he has been confined at Pine Prairie in close quarters with at least 11 other people who have recently tested positive for the virus, he said.

ICE did not respond to Al Jazeera’s request for comment. The agency said in late April that it would begin testing some migrants prior to deportation, but it did not elaborate on timing, US media reported.

At least 788 detainees – including 29 at the Pine Prairie detention centre – have tested positive for COVID-19, according to the ICE, with 1,593 tests performed. There are currently more than 29,000 people detained in ICE facilities across the US.

IJDH Immigration Policy Coordinator Steve Forester said that while it is reckless for the US to deport people in the middle of a pandemic without at least testing them to make certain they are not carrying the virus, Monday’s planned deportation flight “takes reckless to a whole new level”.

“For the United States to knowingly send COVID-positive people to Haiti is a tremendous lack of respect for Haiti and Haitians,” he told Al Jazeera, adding, however, that “this is in line with [US President Donald] Trump’s prior statements and actions.”

How many other people are they deporting who they have tested positive?

The US has been accused of deporting the virus, with more than 100 deported Guatemalans testing positive, according to Guatemalan officials. At least three people deported by the US on April 7 tested positive for the coronavirus upon returning to Haiti, according to the Haitian Ministry of Public Health. The US has deported individuals to at least nine other countries across Latin America and the Caribbean since February, according to the Center for Economic and Policy Research, despite US and international guidelines that emphasise the risks that international travel presents for the spread of the coronavirus.

“How many other people are they deporting who they have tested positive?” Forester asked.