The coronavirus death toll in the United States surpassed 90,000 on Monday as the total number of confirmed COVID-19 cases climbed above 1.5 million across the country, according to the Johns Hopkins University tally.

The grim milestones came as President Donald Trump tweeted to “REOPEN OUR COUNTRY!” and the White House attempted to shift blame, including onto its own scientists, for the high number of deaths.

On Sunday, members of Trump administration disagreed on whether the US Centers for Disease Control and Prevention (CDC) let the country down with testing efforts.

“Early on in this crisis, the CDC, which really had the most trusted brand around the world in this space, really let the country down with the testing,” Peter Navarro, Trump’s trade adviser, told NBC’s Meet the Press programme.

“Not only did they keep the testing within the bureaucracy, they had a bad test, and that did set us back,” Navarro, who has no medical training, said.

The CDC, which is under the Department of Health and Human Services (HHS) and part of the Trump administration, faced early criticism for its handling of US testing efforts, which Trump now touts without evidence as the “best in the world”.

The CDC initially sent out faulty test kits and struggled to ramp up testing efforts as the virus took hold across the US. 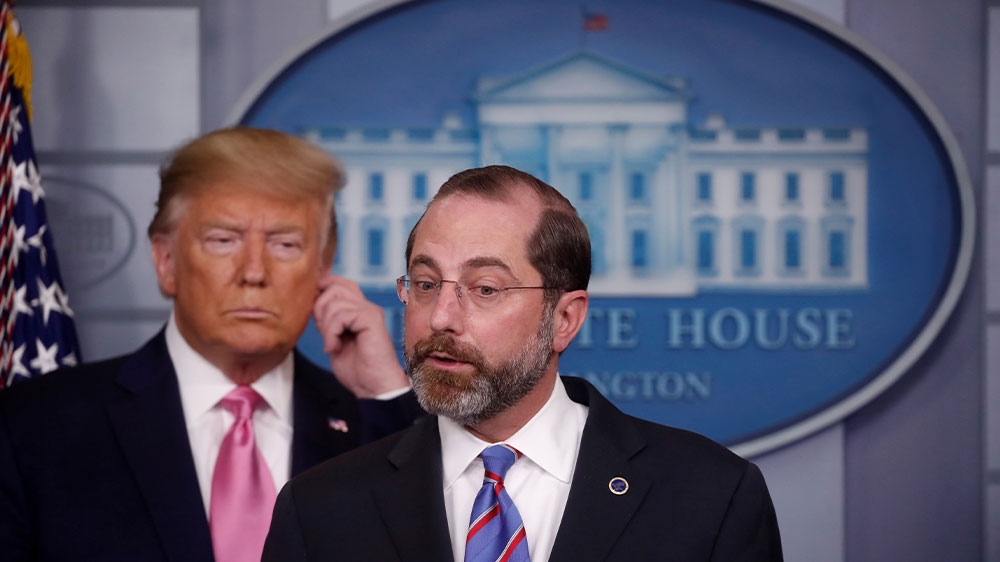 US Health and Human Services Secretary Alex Azar speaking during a news conference on the coronavirus pandemic in the White House in Washington, DC [File: Carlos Barria/Reuters]

“I believe the CDC serves an important public health role and what was always critical was to get the private sector to the table,” he said.

Navarro suggested that the US’s high death toll was partially due to the fact that the country has high levels of underlying conditions, making complications from the virus more likely.

“Unfortunately, the American population is very diverse,” he told CNN.

“It is a population with significant unhealthy comorbidities that do make many individuals in our communities, in particular African American, minority communities particularly at risk here because of significant underlying disease health disparities and disease comorbidities – and that is an unfortunate legacy in our healthcare system that we certainly do need to address,” Azar said, emphasising that he was not blaming one particular group, but “we do have greater risk profiles here in the United States.”

“This is not about fault. It’s about simple – simple epidemiology and stating that, if we have hypertension, if we have diabetes, we present with greater risk of severe complications from corona – from this coronavirus,” Azar said.

There have reportedly been heightened tensions between the CDC and the White House over recent weeks over guidance for reopening.

According to US media, citing leaked documents, the CDC had drafted 68 pages of strict reopening guidelines, but only published six pages of “decision trees” graphics as updated guidance.

CDC Director Robert Redfield said last week the US was on pace to exceed 100,000 coronavirus-related deaths by June 1.

Support grows for WHO probe

The Trump administration, meanwhile, continues to blame China, where the new coronavirus is believed to have originated, and the World Health Organization (WHO) for the virus’s deadly spread.

Azar on Monday said the pandemic had “spun out of control” in great part due to a costly “failure” by the WHO, and called for a more effective WHO.

“There was a failure by this organisation to obtain the information that the world needed, and that failure cost many lives,” Azar told the WHO’s two-day annual assembly being held online.

Azar, without naming China, said: “In an apparent attempt to conceal this outbreak, at least one member state made a mockery of their transparency obligations, with tremendous costs for the entire world.”

“We saw that WHO failed at its core mission of information sharing and transparency when member states do not act in good faith. This cannot ever happen again,” he added.

More than 100 countries, including 50 African nations and all European Union member states, have backed a resolution calling for an independent probe into the coronavirus pandemic, Australia said before the two-day assembly began.

WHO Director-General Tedros Adhanom Ghebreyesus said on Monday an independent review of the global coronavirus response would begin as soon as possible.

China has previously opposed calls for a review of the origin and spread of the coronavirus, but President Xi Jinping signalled that Beijing would be amenable to an impartial evaluation of the global response once the pandemic is brought under control.

Xi pledged $2bn over the next two years to help deal with COVID-19, especially to help developing countries. The amount is roughly equivalent to the WHO’s entire annual programme budget for last year, and more than compensates for Trump’s freeze in US payments that had been worth about $400m a year.

Back in the US, Trump has ramped up his push to reopen the US, despite the risk to health.

Last week, the president rebuked the country’s top infectious disease expert, Dr Anthony Fauci, over a warning he gave about reopening the country too quickly. 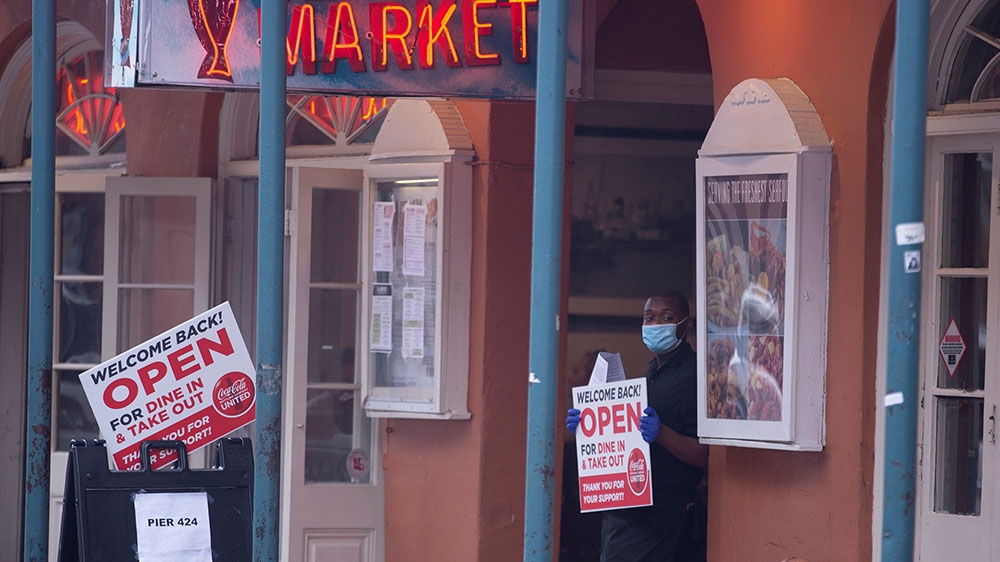 A worker stands outside Pier 424 Seafood Market as coronavirus lockdown restrictions were eased after two months, including allowing for 25 percent of permitted occupancy in stores and restaurants in New Orleans, Louisiana [Kathleen Flynn/Reuters]

Fauci, who directs the National Institute of Allergy and Infectious Diseases, warned that a premature lifting of lockdowns could lead to additional outbreaks of the deadly coronavirus.

“There is a real risk that you will trigger an outbreak that you may not be able to control,” Fauci said.

Trump called the warning was unacceptable, and said the US was “back” with or without a vaccine.

“I don’t want people to think this is all dependent on a vaccine,” Trump said on Friday as he announced the US efforts to develop a vaccine that would be ready to deploy by 2021, a timeline that contradicts many health experts, who say a vaccine will take 12-18 months to develop and test.

“Vaccine or no vaccine, we’re back. And we’re starting the process,” Trump said, adding that he would like to see schools open before the end of the year. 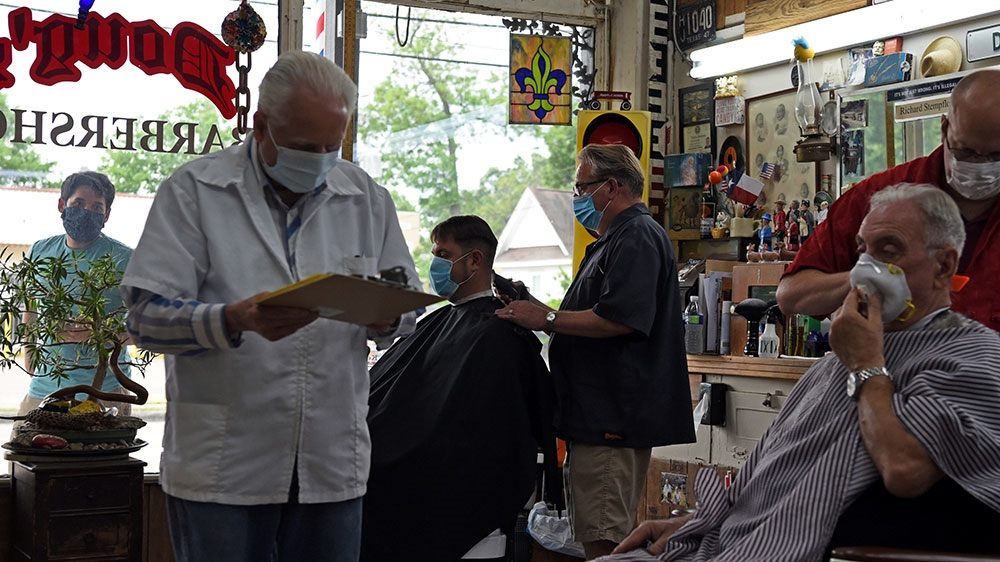 Most states have started to reopen, at least partially, over the last month. Health experts say it could be weeks before the US knows the effect of its reopening.

Texas, which has allowed non-essential businesses to reopen with restrictions, reported its largest single-day jump in the number of cases on Saturday.

The state reported 1,801 new coronavirus cases, bringing the total number of cases in the state to 46,999.

Officials attributed the jump to increased, targeted testing in high-risk areas, including meat-packing plants, which have seen a surge in cases across the US.

Although nearly all 50 states are reopening, only 13 had met federal government guidelines for lifting measures as of Sunday, according to a Reuters news agency analysis, raising concerns that infections and deaths could surge anew.

Trump continued to contradict health expert opinion on Monday, saying that with his doctor’s approval he was taking hydroxychloroquine as a preventive medicine against the coronavirus despite medical warnings about the use of the malaria drug.

In an April 24 statement, the FDA said it is “aware of reports of serious heart rhythm problems” in patients with COVID-19 treated with hydroxychloroquine or an older drug, chloroquine.