For more than three months, Michelin-starred chef Vikas Khanna has helped serve 20 million meals to poor Indians facing hunger, from thousands of miles away in the United States.

The Indian-born Khanna, who moved to the US in 2000, started the ‘Feed India’ campaign in April, after Prime Minister Narendra Modi announced a strict coronavirus lockdown, which forced millions out of work, many of them facing hunger.

“It all began after a spam email with the picture of an old-age home,” Khanna says, “where people were left to fend for themselves with little food”. The moment “crushed him” and made him realise that India was about to embark on a major hunger crisis.

‘Feed India’ has provided ready-made meals and dry rations to people in at least 125 Indian cities – including Mumbai, New Delhi, Varanasi and Bengaluru.

The campaign has distributed food at leprosy centres, on railway tracks, elderly care homes, highways and orphanages, to name a few.

India has recorded more than 900,000 coronavirus infections to date, making it the third worst-affected country in the world. 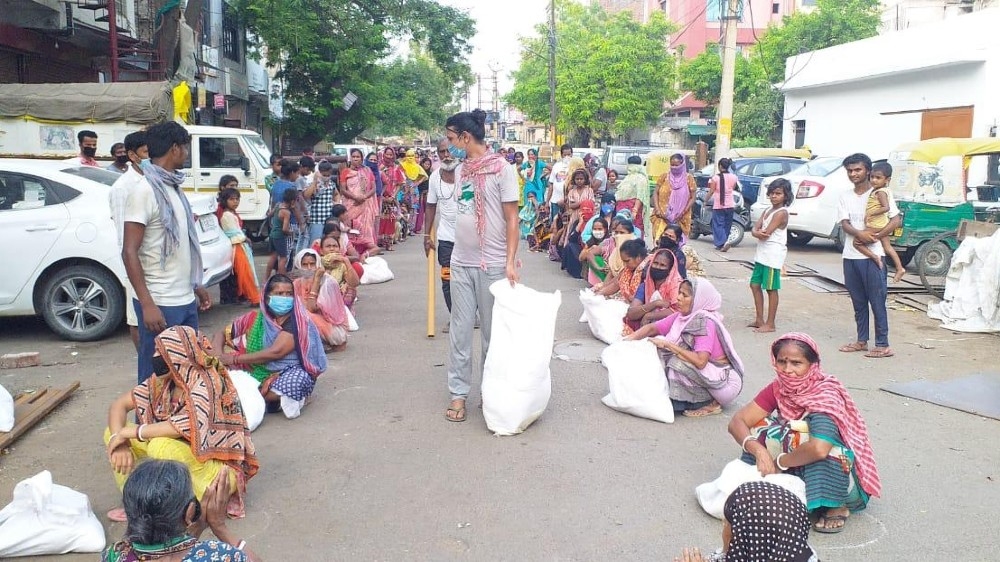 Khanna and his partners have distributed meals and rations at leprosy centers, on railway tracks, elderly care homes, highways and orphanages [Courtesy of Vikas Khanna and Maximus Collabs]

In collaboration with marketing outfits, food brands, India’s National Disaster Response Force, and numerous volunteers, Khanna has organised food drives from his apartment in the upscale New York neighbourhood of Manhattan via telephone and online platforms; overseeing all logistical requirements, including vendor pick-ups and distribution of meals on-site.

“I did not realise there would be so many variables, so many moving parts in conducting this food drive,” Khanna told Al Jazeera by phone.

“At many times, it felt like our campaign would collapse,” the Manhattan-based chef said.

Khanna, who has previously cooked for personalities such as Barack and Michelle Obama, said he had tried to stop the campaign in April, telling his partners and staff that “he could not take the stress”.

However, the chef’s mother, Bindu Khanna, convinced him to continue, telling him it was “his duty to feed India”, a phrase which would later inspire the name of his campaign. 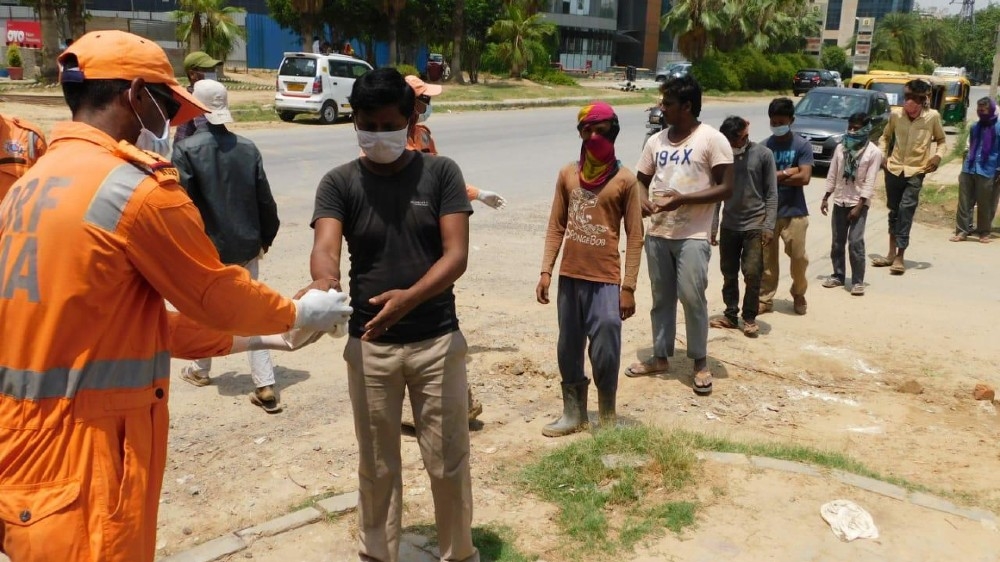 In late March India announced one of the strictest lockdowns in the world to curb the spread of coronavirus, triggering a humanitarian crisis [Courtesy of Vikas Khanna and Maximus Collabs]

Manisha Singh, founder of event planning firm Maximus Collabs, and a long-time collaborator with Khanna, said she felt “blessed to be chosen for this service” and the whole experience had been “very satisfying”.

“There are many experiences that will go with me forever of those people who saw food after days and the journey of how each morsel has reason to where it belong … there is a picture of a migrant that moved me so much that I cried looking at it … how basic food for many become a big luxury in these times,” Singh told Al Jazeera.

“It was heart-breaking but when you are able to ease that pain … it fills you with satisfaction and helps you with gratitude too,” she said, adding that the whole experience had made her a “better person and also help me value each life even more”.

As part of his Feed India campaign, Khanna successfully conducted one-off drives to pay tribute to different communities, including organising around 200,000 meals on the occasion of Eid al-Fitr in May, in the financial hub of Mumbai.

Sabir Jamal, who helped coordinate the event at Haji Ali Dargah, a famous Muslim shrine, told Al Jazeera it was a “beautiful feeling” to serve the community at Eid, the main festival celebrated by Muslims – considering many were unable to secure even one meal a day during the lockdown.

“Some of the receivers were in tears … they were eternally grateful and said they would pray for the organisers,” Jamal said.

Meals were also distributed in several slums around the city, where some 12-15 people live in a space of 9 sq metre (97 sq feet), Jamal said. 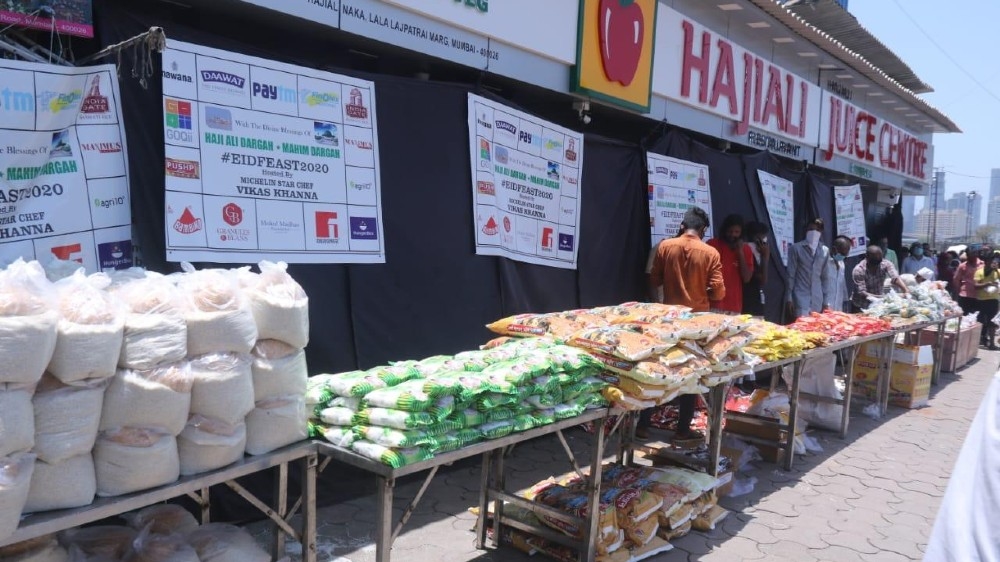 For Khanna, organising for the Muslim holiday was the most satisfying moment in the campaign.

The feast was inspired by his encounter nearly three decades ago with a Muslim family in 1992 in Mumbai during what is known as the Bombay riots.

A Muslim family gave Khanna, then 21 years old, shelter after he was stranded during the deadly violence. More than 900 people were killed in the worst Hindu-Muslim riots in the city.

“She kept on saying she had to protect me … the family shared everything, whatever food they had, with me,” Khanna said, recalling how the family matriarch took care of him while he hid in their home.

Since 1992, Khanna says, he has fasted once every Ramadan, as a tribute to the woman and her family for their generosity and kindness.

“I always tell people I have an amma (his biological mother) and an ammi,” he said – amma meaning mother largely used by Hindus, and “ammi”, an Urdu word for mother mostly used by Muslims.

Among numerous one-off events organised by Khanna and his team was ‘Barkat’ (meaning blessings in Arabic) held on June 11, an initiative targeted towards providing food and rations to other vulnerable communities such as old-aged people, disabled person, sex workers and the transgender community.

Laxmi Tripathi, a trans activist based in the capital, New Delhi, said the event provided the much-needed ration and food for her community, one of the most discriminated groups in India.

“This event is an example of how people can come together and that no one should be left behind,” she added. 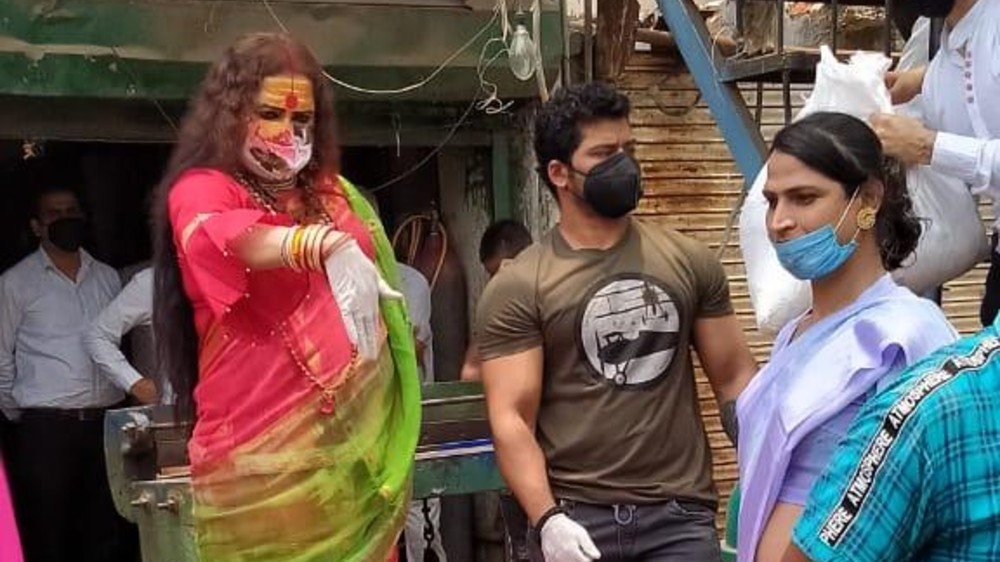 “It provides a sense that anyone who organises such an event should consider marginalised communities that are hit the most during this pandemic.”

Transgender persons in India are often target of discrimination and violence, often living and working in poor conditions. In recent years, the state has taken several steps to recognise their plea including recognising them as a third gender.

Ayush Gupta, the business head at KRBL, one of India’s biggest rice processing companies, and also one of Khanna’s campaign partners, told Al Jazeera some two million meals were served at the ‘Barkat’ event.

“When we went to them with dry-rations enough to sustain a family of four for a month, the happiness and satisfaction on their faces was beyond description,” Gupta said, adding they provided meals to over 20,000 families across the Indian capital.

Khanna, who has authored numerous books, said the ‘Feed India’ campaign had deeply changed him, adding the months-long exercise was certainly his biggest achievement, and “bigger than any Michelin Star” – an award he won in 2011.

“When I receive a phone call from a leprosy centre and I hear they have placed a picture of my mother on the wall, because they see your mother as theirs … that is the biggest compliment.”

At the moment, Khanna has not set any end-date to the campaign, adding he has never done anything “half-heartedly”, despite the enormous challenges his campaign continues to face.

He said a lot of ‘Feed India’ drives such as ‘Barkat’ were serving as pilots for future campaigns to address other humanitarian crises if they were to occur.

“This idea came to me as a duty from the Universe, and I will continue for as long as I can … who knows maybe ‘Feed India’ becomes a permanent mission for me.”