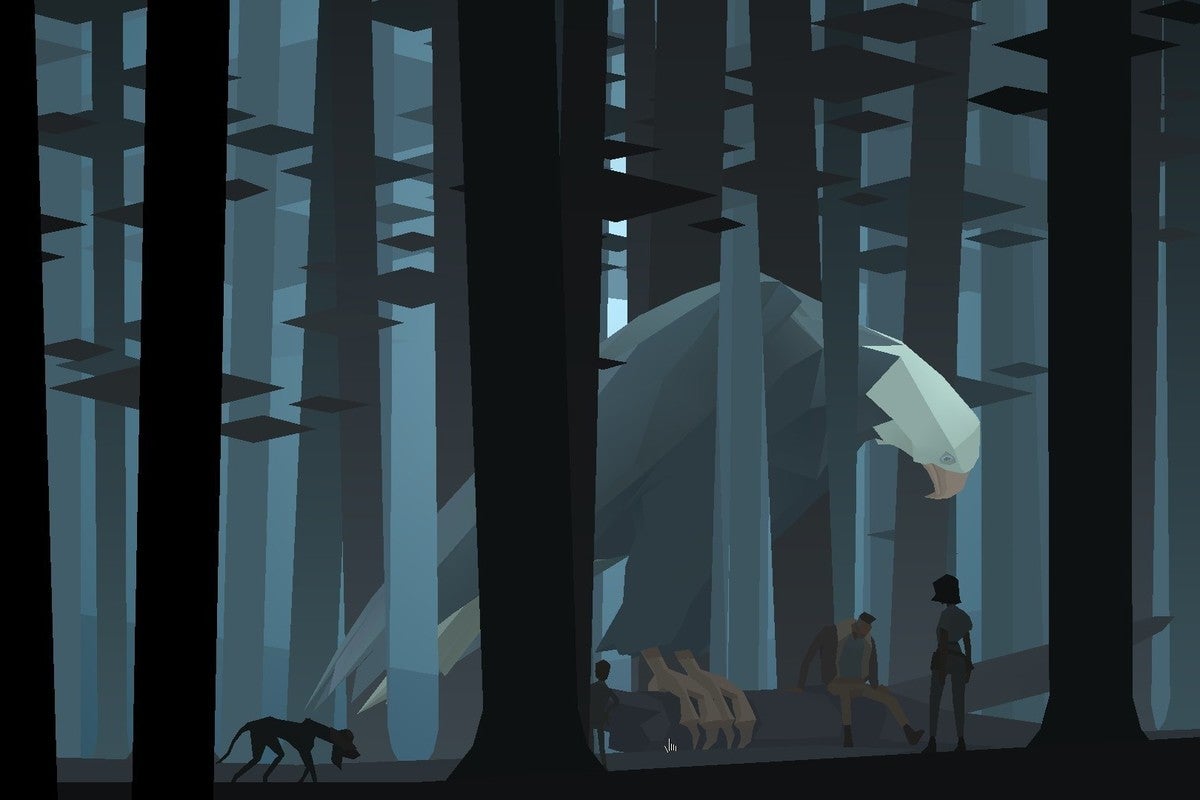 It’s been one hell of a year, eh? Or one hellish year, whichever you’d prefer. 2020 was already on track to be a weird one for video games, with new consoles just over the horizon. The transition is always awkward, as publishers rush out their last few efforts before the door closes and everyone stops caring about the “old” consoles forever.

But obviously a world in flames has made the release schedule even more volatile than expected. Most of the spring’s big games—Cyberpunk 2077, Vampire: The Masquerade – Bloodlines 2, Wasteland 3, Watch Dogs Legion—were pushed to the end of the year, leaving us to celebrate…Halo 2?

In all seriousness, there have been some good’uns released in the first half of 2020. Not many. Barely enough to put together a top ten list, actually. But there have been some. Below, you’ll find our favorite PC games of 2020 so far, in no particular order.

We don’t typically add expansions to our best-of lists, or if we do we reserve them for an honorable mention. But hey, desperate times, right?

Actually, that’s selling Mortal Kombat 11: Aftermath short. Forget the arbitrary restrictions. Aftermath deserves to be on this list, because it’s some of the most fun I’ve had this year. Picking up right where Mortal Kombat 11’s original time-traveling story left off, Aftermath reworks the timeline again. The resulting tale of cause and effect, of grand plans and betrayals, is some of the best storytelling in Mortal Kombat to date, and a fantastic capstone on the current trilogy.

The price is steep. Like, extremely steep. We don’t comment on price often, but $40 to enjoy a two- or three-hour epilogue is a bit hard for even me to swallow. But damn, it’s one hell of an epilogue.

A single screenshot convinced me to play through all of Cosmo D’s games. In a press release for Tales from Off-Peak City, Vol. 1 there was a shot of a city block, and one of the buildings doubled as an enormous face. “That’s weird,” I thought. “Maybe I should give this a shot.”

Little did I know building-shaped-like-a-face was one of the least surreal encounters in Cosmo D’s oeuvre. 2015’s prologue (or demo) Off-Peak is a great place to start if you want to get a feel for these strange adventure games, and The Norwood Suite is fairly cheap as well. The first takes place in a bootleg train station, the latter in a labyrinthine music-themed hotel. And Tales from Off-Peak City? Two city blocks, housing a pizza place, a pawn shop, and (somewhere) a legendary saxophone ripe for the stealing.

Tales from Off-Peak City, Vol. 1 is yet more proof that games can be so much more than just the relentless pursuit of bland realism. Be weird! Be creative! Be uncomfortable! And most of all, be memorable.

Monster Train does not put its best foot forward, I think. Most card games—aside from Gwent—relegate story to the back burner. That’s fine. But Monster Train seemed painfully generic when I first loaded it up, a story of angels versus demons with surprisingly little soul to it.

Ignore that, though. Get past the clunky writing and the somewhat awkward interface, and you’ll find a fantastic combination of card battler and tower defense. Your goal is to defend the titular train from invaders, and you do so by doling out your own army each turn. Strong enemies go up front, weak in the back. And because it’s just you versus the AI, Monster Train allows you to create some truly broken (meaning unbalanced) decks. That’s the fun of it really, exploiting card combinations to wreck your enemies. Multiplayer card games always sand those strategies down over time to improve the meta, but in Monster Train building an overpowered deck is practically the point.

I’ll admit that the longer I played Gears Tactics, the less enamored I felt. The third act is bloated with filler, with meaningless side missions that do little but derail the pacing and pad out the runtime.

And that’s a shame because pacing is what sets Gears Tactics apart from other tactics games, at least in the early hours. When Gears Tactics is moving, it really moves. Storming into a Locust choke point and blasting away six foes in a single turn, using executions to chain together kill after kill, making a frantic run for the exit as waves of enemies descend on your position—it’s a tactics game with the tenor of a shooter. Don’t stop. Don’t think. Move and act on instinct. That flair for the cinematic is what elevates Gears Tactics above “XCOM clone” status, and makes it still worth a look even if the back half grinds.

Doom Eternal is one of the most elegant shooters I’ve ever played. It is meticulously designed, a cascade of systems that push and prod at the player. It is a puzzle you solve at 100 miles per hour, with your hands on fire. Cacodemon? Toss a grenade in its mouth and then rip its eye out. Arachnotron? Shoot off its turret-tail. Mancubus? Destroy its arms. And save the Makyr Drone for your last desperate stand, so you can pop its head off and restock on ammo.

It’s not to everyone’s liking. I’ve seen people complain they feel restricted by Doom Eternal and the way it designs enemies around a series of hard counters, and those people aren’t necessarily wrong. I loved it though, finding in Doom Eternal the depth I thought 2016’s Doom reboot lacked.

Ancient Enemy is solitaire. “Fancy” solitaire, I’ve taken to calling it, but solitaire nevertheless. The cards are dealt out, and then you stack them (either one number higher or lower) atop one another until you run out of moves. Draw a card, and repeat.

The twist is that cards in Ancient Enemy power up abilities you use to attack various enemies, making your way through a world of hooded bandits and skeleton warriors one combo at a time. I suspect the combos are part of Ancient Enemy’s appeal, with the game keeping its thumb on the scale in favor of the player. As I said in my review, “Ancient Enemy gets its hooks in because it feels like you’re always outsmarting the game—even though I suspect that’s exactly what it wants you to think.” It’s easy to go on 20-, 30-, even 40-card runs and annihilate foes in a single turn.

And it’s solitaire, so you can save the world from an ancient evil while listening to a podcast—or while worrying that the actual world is ending, in my case.

A few years ago developer Mimimi Games revived the real-time tactics genre with Shadow Tactics: Blades of the Shogun, drawing on classics like Commandos and Desperados for inspiration. Apparently they did a good job, because THQ Nordic entrusted them with the actual Desperados license for a sequel nearly 15 years in the making.

It paid off. Desperados III is another fantastic effort from Mimimi. It’s every bit the follow-up to Shadow Tactics, but with many of the rougher edges sanded off. More expansive levels and a well-written and well-acted Wild West story make Desperados III maybe the most accessible real-time tactics game ever developed. I’m thrilled Shadow Tactics wasn’t just a one-off, and I can’t wait to see what’s next from Mimimi.

This is the year we finally got a new Half-Life, in case you forgot—and it was made for virtual reality. I still can hardly believe it.

What did it mean though? I still don’t think we’re far enough away to say definitively. Was Half-Life: Alyx the watershed moment? Did it convince people to take VR seriously? I don’t know. It certainly sold a lot of headsets to a lot of people. Maybe that’s enough, even if it didn’t break much new ground. Again, I just don’t know.

I suspect it’ll take years for the dust to settle. That said, Alyx is an excellent new chapter for Half-Life, and deserving of a spot on this list even if it didn’t reinvent the entire games industry. And hell, maybe now that Valve’s broken free from the weight of expectations, it won’t feel so hemmed in developing the next chapter.

Earlier this year I spent a lot of time watching Repair Shop, a delightful show where British artisans fix various objects. Part of my fascination was the mechanical, watching Steve Fletcher disassemble and clean old clocks. But the best episodes had little to do with the how of the repair and more to do with the why. Maybe someone brought in an old toy from their childhood, or a sign that hung outside their neighborhood pub for decades, or their grandmother’s rocking chair. Seeing the owner’s face when the object was unveiled, good-as-new, that is the real draw of Repair Shop.

Anyway, Assemble with Care taps into that same feeling. It’s a short game about repairing various household items, yes, but really it’s a game about the memories with which we imbue said items. In an era where most objects are mass-produced and disposable, the memories are what warrant the time and labor and love that goes into repair.

Kentucky Route Zero is the game of the generation, if only because it took the entire console generation to release. Episodic back when episodic was in-fashion, the first chapter released back in 2013, the last this past January. Or to put it in slightly more personal terms: The first chapter released right before I arrived at PCWorld, and…well, I’ve been here quite a while.

And I naively put off playing it for years, waiting to experience it in one go. Then I did and wow. As I said in my review, it’s obvious in retrospect that so many of the games I loved this generation drew from Kentucky Route Zero, in spirit if not directly. That list includes Disco Elysium, Celeste, Night in the Woods, even (probably) Tales from Off-Peak City.

Kentucky Route Zero is the kind of game that makes other people want to make games. A sprawling story of love and found family and betrayal and loss and Capitalism, it’s messy and unapologetic and very heartfelt. I saw myself in its characters. I saw my friends in its characters. It’s one of the finest pieces of interactive fiction I’ve ever played—and only “one of” because so many developers have taken its lessons and run with them these past seven years.

Plop. Plop. Plop. There is no conflict in Townscaper, nor goal. It’s a game about building for the sake of building, a freeform architectural tool with only two controls. Left Click, you add. Right Click, you subtract.

Click once, you’ve made an island. Click again, a small cottage. A few more times, a village. And while “Seaside Village” is the easiest and most obvious product of Townscaper’s tools, I’ve seen some incredible creations since its release a few weeks ago. Castles and labyrinths, modernist hotels and fantastical towers, it’s the perfect game to unwind with at the end of the night. Start clicking and see where it takes you. I’m excited to see where Townscaper goes as Early Access progresses, but it’s already one of my favorites for 2020.