Police seeking a gang leader has raided a cluster of poor neighbourhoods in Brazil’s Rio de Janeiro, clashing with residents and killing at least 10 people.

In a statement on Friday, police said “multiple clashes” erupted when an elite unit investigating the whereabouts of a local drug kingpin entered the quarantined Complexo do Alemao neighbourhood.

The man’s identity was not released, but officials said he had escaped prison in 2016 and was considered one of the leading drug traffickers in the Pavao-Pavaozinho and Cantagalo slums, which border Rio’s iconic Copacabana and Ipanema neighbourhoods.

He was among those killed in the operation, according to the statement.

Police said they came under grenade and gunfire attack in the Alemao complex and recovered dozens of high-powered weapons, including rifles and grenades. 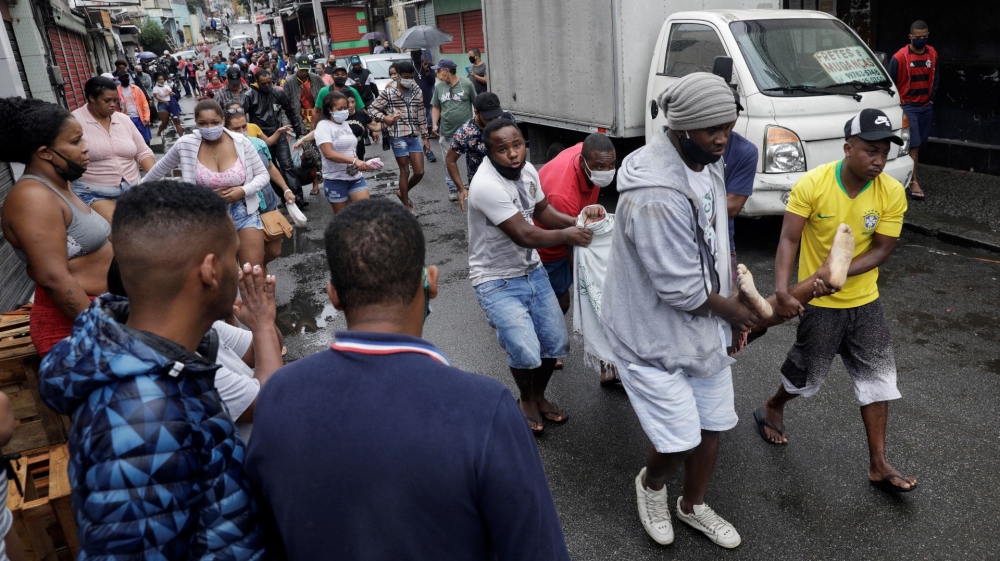 Residents carry a dead body after a police operation against drug gangs at the Alemao slums complex in Rio de Janeiro, Brazil, on May 15, 2020 [Ricardo Moraes/ Reuters]

Five people were pronounced dead at a nearby hospital, while residents carried five other bodies to the entrance of the group of slums.

The bodies were laid next to one another on the street and drew a small crowd of people, some of whom were not wearing any masks despite the threat of the coronavirus pandemic.

Family members at the scene cried as they covered the bodies, already wrapped in fabrics, with cardboard boxes to shelter them from the rain.

“Social distancing? For who?” asked Fabio Felix, a left-wing legislator, on Twitter. “It’s incredible that the lives of the poor aren’t worth anything, even during a pandemic!”

Police said in a statement the incident would be reviewed by homicide detectives, following standard practice.

Several residents complained that the government was offering little aid to contain the new coronavirus, but was still engaging in violent police operations that risked spreading the virus through low-income communities.

“Within and outside the context of a pandemic, we demand that public security authorities respect human rights while policing,” the Brazilian office of Amnesty International said on Twitter.

The city of Rio had registered 1,509 deaths from the coronavirus and 11,264 confirmed cases by Thursday evening, according to municipal authorities, who say those figures are likely undercounting the outbreak due to a lack of testing.

Police violence has been rising rapidly in Brazil, where authorities, including President Jair Bolsonaro, have encouraged police to kill more.

From January through March, police killed 429 people during operations in Rio de Janeiro state, down 1.6 percent from the same period a year earlier. Homicides have also gone down, declining 0.9 percent this year to 1,044 victims.