Much to the dismay of the progressive wing of the Democratic Party in the United States, former Marine pilot Amy McGrath on Tuesday overcame a bumpier-than-expected Kentucky primary to win the Democratic nomination to run against Republican Senate Majority Leader Mitch McConnell.

Voting ended June 23, but it took a week until McGrath could be declared the winner due to the race’s tight margins and a deluge of mail-in ballots. The outcome seemed a certainty early in the campaign, but became tenuous as challenger Charles Booker’s profile surged when the Black state legislator was embraced by icons of the party’s progressive wing, such as Bernie Sanders and Elizabeth Warren.

It was a narrow victory for McGrath. With 99 percent of precincts reporting on Tuesday afternoon, she had an 11,832-vote advantage over Booker out of nearly 531,000 votes cast. McConnell, a key ally to President Donald Trump, already breezed to victory in the Republican primary in his bid for a seventh term.

35 year old Charles Booker grew up in the poorest zip code in Kentucky.

He ran his campaign on the basis that we all deserve the right to survive and especially on behalf of those he felt had become invisible to Mitch McConnell. https://t.co/00D5FBcOY7

Since last year, McConnell and McGrath looked past their primaries to skirmish with each other, and now those attacks will intensify heading into the campaign.

Declaring victory, McGrath reached out to Booker’s supporters to try to unite the party for the challenge ahead against McConnell, who has dominated Kentucky’s political landscape for decades.

“There is far too much at stake,” McGrath said in a statement. “The differences that separate Democrats are nothing compared to the chasm that exists between us and the politics and actions of Mitch McConnell. He’s destroyed our institutions for far too long.” 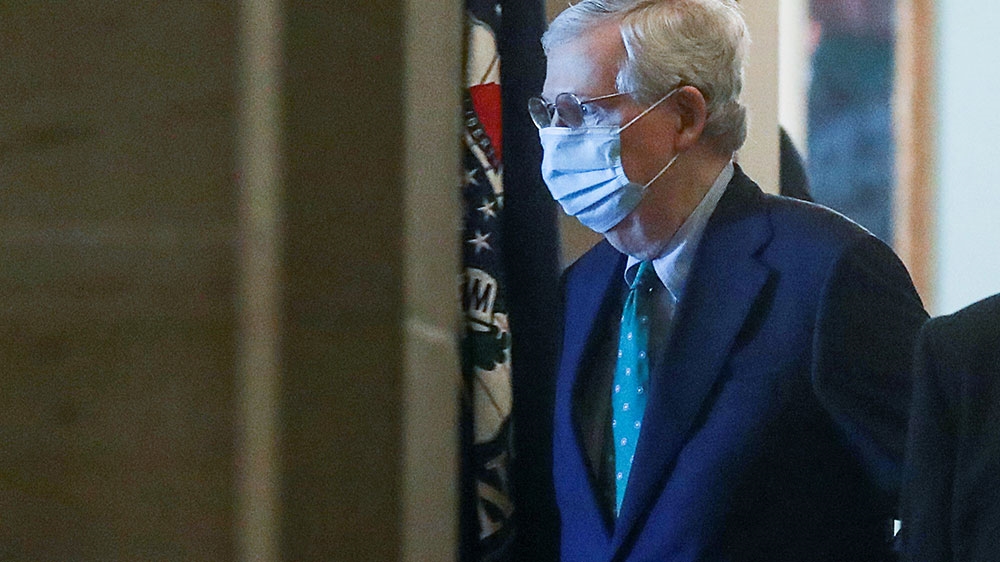 McConnell, wearing a protective mask as he arrives at his office inside the US Capitol, faces a bruising campaign against challenger Amy McGrath [File: Leah Millis/Reuters]

McConnell campaign spokeswoman Kate Cooksey said McGrath’s narrow victory was proof that her campaign is damaged heading into the general election. Cooksey portrayed McGrath as a “tool” for the national Democratic establishment and said the challenger was out of step with Kentucky with her support for abortion rights and “government-run healthcare”.

McGrath has raised prodigious amounts of campaign cash, capitalising on the wrath national Democrats have for McConnell. It places her in a position to go toe-to-toe with the always-well-funded McConnell.

Despite her advantages, McGrath sweated out her victory against the hard-charging Booker.

Booker’s long-shot bid surged amid the national eruption of protests against police brutality. He joined demonstrations in his hometown of Louisville to demand justice for Breonna Taylor, who was fatally shot by Louisville police in her own home. Booker gained the backing of leading national progressives as he supported a universal basic income and Medicare for All – ideas that McGrath resisted.

McGrath charted a more moderate course inside Democratic politics. She supports adding a public health insurance option as part of the Obama-era Affordable Care Act and supports expanded access to Medicare for people 55 and older.

She portrayed McConnell as an overly partisan, Washington insider who exemplifies what is wrong with national politics. She accused McConnell of undermining labour unions, awarding tax cuts for the wealthy and cosying up to pharmaceutical companies while people struggle to afford prescription drugs.

McConnell accused her of being too liberal for Kentucky on issues ranging from abortion to border security. He promoted his work with President Trump – who remains popular in Kentucky – to appoint conservatives to fill federal court seats. McConnell also played up his Senate leadership role and his ability to steer federal money back to the Bluegrass State.

Prepare for another surge of Saharan dust from Sunday, said the Trinidad and Tobago Meteorological Service. In a Saturday update,