Dr Anthony Fauci, the United States government’s top infectious disease expert, warned on Tuesday that “the consequences could be really serious” if cities and states reopen the US economy too quickly with the coronavirus still spreading.

More COVID-19 infections are inevitable as people again start gathering, but how prepared communities are to stamp out those sparks will determine how bad the rebound is, Fauci told the Senate Committee for Health, Education, Labor, and Pensions.

“There is no doubt, even under the best of circumstances, when you pull back on mitigation you will see some cases appear,” Fauci said.

And if there is a rush to reopen without following guidelines, “my concern is we will start to see little spikes that might turn into outbreaks,” he added. “The consequences could be really serious.”

He said opening too soon “could turn the clock back,” and that not only would cause “some suffering and death that could be avoided, but could even set you back on the road to try to get economic recovery”.

Fauci was among the top experts who testified via video conference after putting himself in quarantine because a White House staffer to whom he was exposed tested positive for the virus. The chairman of the committee, Republican Senator Lamar Alexander, also put himself in quarantine after an aide tested positive and will participate by video, too.

Alexander said during his opening remarks that “what our country has done so far in testing is impressive, but not nearly enough.”

Besides Fauci, other experts included Food and Drug Administration Commissioner Dr Stephen Hahn and Dr Robert Redfield, head of the Centers for Disease Control and Prevention – both in self-quarantine – and Admiral Brett Giroir, the coronavirus “testing czar” at the Department of Health and Human Services. The hearing lasted for three and a half hours. 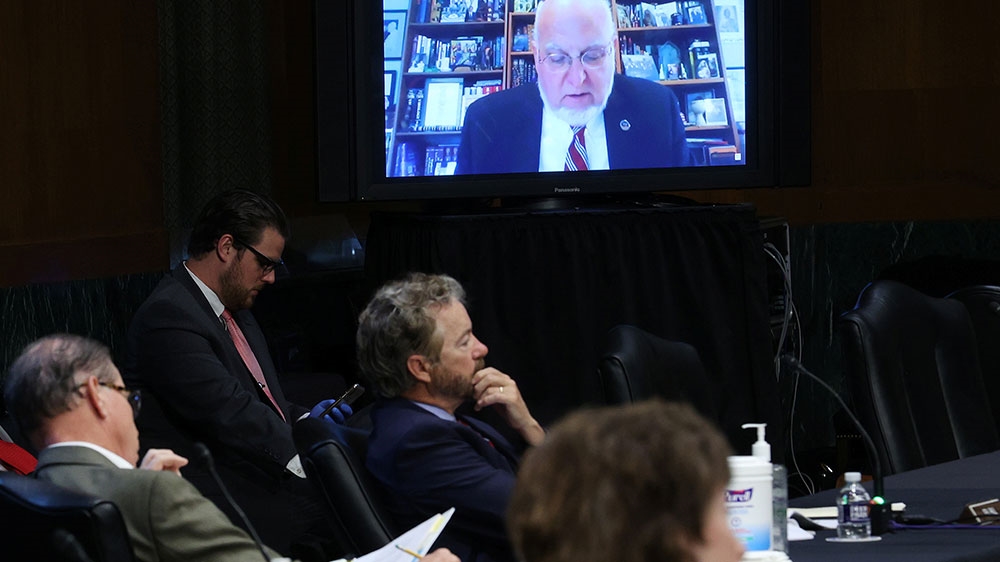 US Senators and staff listen to Dr Robert Redfield, director of the Centers for Disease Control and Prevention, as he speaks remotely during the Senate Committee for Health, Education, Labor, and Pensions hearing on the coronavirus disease (COVID-19) response [Win McNamee/Reuters]

The health committee hearing offered a very different setting from the White House coronavirus taskforce briefings the administration witnesses have all participated in. Most significantly, US President Donald Trump was not controlling the agenda. The White House has blocked Fauci from testifying before a committee of the Democratic-led House of Representatives.

Fauci, director of the National Institute of Allergy and Infectious Diseases, told the Senate panel that the virus epidemic is not yet under control in areas of the nation.

His comments were in sharp contrast to the upbeat tone of Trump, who proclaimed at a White House news briefing on Monday, “We have met the moment and we have prevailed”.

Eyeing the November elections, Trump has been eager to restart the economy, urging on protesters who oppose their state governors’ stay-at-home orders and expressing his own confidence that the coronavirus will fade away as warmer weather advances and Americans return to work and other pursuits. More than 20 million Americans lost their jobs in April.

The US has seen at least 1.3 million infections and more than 81,000 confirmed deaths from the virus, the highest toll in the world by far, according to a tally by Johns Hopkins University.

A recent Associated Press news agency review determined that 17 states did not meet a key White House benchmark for loosening restrictions – a 14-day downward trajectory in new cases or positive test rates. Yet many of those have begun to reopen or are about to do so, including Alabama, Kentucky, Maine, Mississippi, Missouri, Nebraska, Ohio, Oklahoma, Tennessee and Utah.

Of the 33 states that have had a 14-day downward trajectory of either cases or positive test rates, 25 are partially opened or moving to reopen within days, the AP analysis found. Other states that have not seen a 14-day decline remain closed despite meeting some benchmarks.

“Lives are at stake. The president isn’t telling us the truth,” said Senator Patty Murray, a Democrat.

“The Trump administration response to the pandemic has been a disaster all on its own,” Murray added.

The hearing was more cordial than many of Congress’s undertakings have been in recent years, with most members of the Senate Health, Education, Labor and Pensions Committee addressing the non-partisan health experts politely.

Paul is among the Trump allies in Congress who are casting doubt on epidemiological models that predict more COVID-19 deaths and who are pushing for a rapid reopening of the US economy.

Fauci shot back, saying he has never made himself out to the end-all and only voice on the pandemic.

“I’m a scientist, a physician and a public health official. I give advice on the best scientific evidence,” he said.

A majority of Americans disapprove of protests that have popped up in several states against restrictions aimed at preventing the spread of the coronavirus, according to a recent poll that also suggested the still-expansive support for such limits – including restaurant closures and stay-at-home orders – has dipped in recent weeks.

The survey, published on Monday by the University of Chicago Divinity School and The Associated Press-NORC Center for Public Affairs Research, finds 55 percent of Americans disapprove of the protests while 31 percent approve of the demonstrations.

As some states have begun to slowly ease restrictions on businesses and individuals, the poll also suggested that 71 percent of Americans favour requiring people to stay in their homes except for essential errands. Support for such measures was down slightly from 80 percent two weeks earlier.

Outside experts say the federal government and states are not yet following the broad prerequisites for reopening that the Trump administration had previously laid out.

What is really important moving forward is that, we need transparency on the metrics for success or failure with these various reopening plans on a national level, a state level and a local level,” Dr Thomas Tsai, a professor at the Harvard TH Chan School of Public Health, told Al Jazeera.

With additional reporting by William Roberts in Washington, DC.