El Salvador’s Supreme Court said on Monday that it had ordered the immediate suspension of the state of emergency declared by President Nayib Bukele over the coronavirus.

Salvadoran President Nayib Bukele on Saturday night declared a state of emergency to extend coronavirus measures without approval by congress, touching off a torrent of criticism that the move had been unconstitutional.

Less than a year into his administration, Bukele, a brash 38-year-old leader, has repeatedly angered rights groups, who say he has shown authoritarian tendencies. In February, Bukele and a group of soldiers armed with automatic weapons briefly occupied congress. Last month, he released startling photos of hundreds of jailed gang members stripped to underwear and pressed together in formation, horrifying advocates. 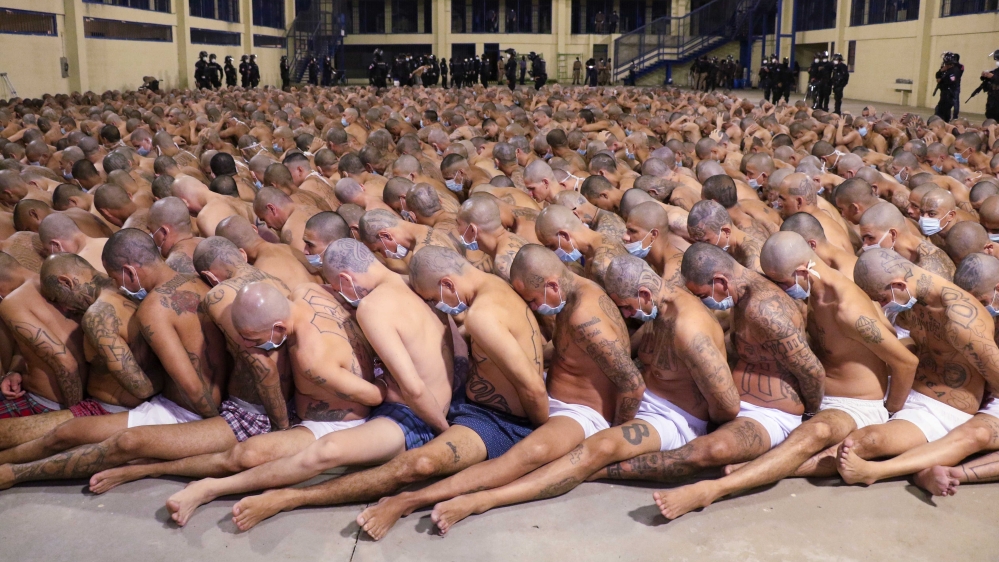 Inmates lined up during a security operation under the watch of police at the Izalco prison in San Salvador, El Salvador [Handout/El Salvador President Press Office/AP Photo]

Congress approved an emergency declaration in March to respond to the coronavirus pandemic, but after an extension in April, the measure was due to expire on Sunday. Legislators planned to discuss an extension when they reconvened on Monday.

Shortly after Bukele issued his decree on Saturday, the Salvadoran attorney general said in a statement that it would file a suit alleging that the move was unconstitutional with the country’s top court. But Bukele, who swept to the presidency last year with an outsider candidacy, maintained he was well within his rights.

“All presidents in the democratic history of our country have had the power to declare a state of emergency and have exercised it, without legislative approval,” he wrote in a post on Twitter on Sunday. “Will a president be prevented for the first time from exercising that vital power?”

Bukele’s administration maintains that a civil protection law authorises the president to declare a state of emergency if congress cannot hold a session.

They contend that the risk of the coronavirus spreading further in El Salvador justifies the measures. The country has 1,413 confirmed cases of the virus and 30 deaths. Health experts say the country’s health system is not equipped to handle a surge in cases.

Legislators and civil society groups urged an investigation to determine whether Bukele had exceeded his powers.

“What would an autocrat do if Congress did not pass a law on his behalf? I would issue a decree. This has just been done by the young Salvadoran leader (Nayib Bukele) with the state of emergency. Another serious setback,” Jose Vivanco, executive director for the Americas for US-based Human Rights Watch, wrote on Twitter.

In recent days, Salvadorans in the capital have protested measures taken during the quarantine, which they say have led to job losses and hunger. To avoid breaking social distancing rules, they voice their discontent by banging pots, honking the horns of their vehicles and playing loud music.

Fabricio Benitez, a 26-year-old musician who lives with his parents and sister on the outskirts of San Salvador, said that his father, a soil engineer, lost his job a month ago after his company’s operations were affected by the pandemic.

“We are subsisting on fairly scarce funds, and we have not benefitted in any way from government programmes,” Benitez said on Friday as he played the Salvadoran national anthem on his viola.