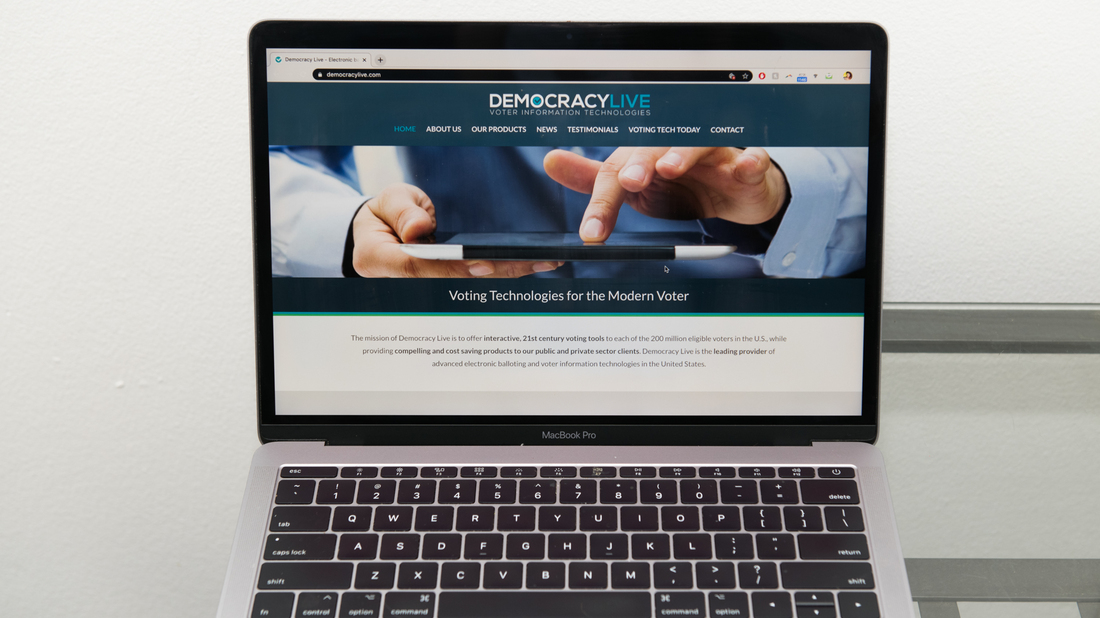 The Democracy Live homepage is displayed on a laptop. The company is administering a ballot return system for disabled voters in West Virginia, Delaware and, potentially, New Jersey. 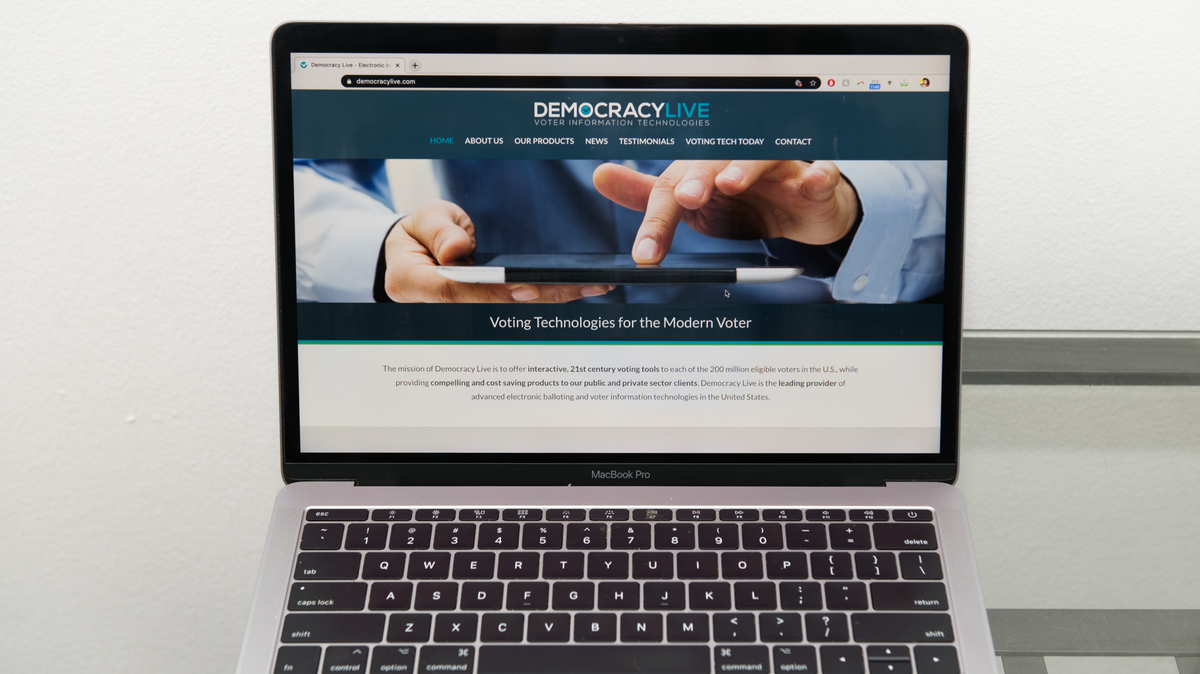 The Democracy Live homepage is displayed on a laptop. The company is administering a ballot return system for disabled voters in West Virginia, Delaware and, potentially, New Jersey.

Election officials nationwide are preparing for what may the highest election turnout in modern history in the middle of a pandemic. In response, several states will be turning to a relatively new and untested form of Internet-based voting to aid the voters who may have the most trouble getting to the polls.

In the latest demonstration of the technology, Delaware will allow voters with disabilities to return their ballots electronically in its primary election next month, becoming the second U.S. state to do so. The decision comes despite grave warnings from the cybersecurity community that the technology doesn’t offer sufficient safeguards to protect the integrity of an election.

NPR is the first to report the development, which has yet to be announced publicly. Both the state, and the Seattle-based company administering the technology, Democracy Live, confirmed the decision, although they dispute the term “Internet voting” for the cloud-based system.

A third state, New Jersey, is considering making the technology available for voters with disabilities and overseas voters, according to an election official with knowledge of the state’s plans. A state elections spokesperson did not respond to a request for comment.

The developments are sure to worry election security advocates. Until the pandemic struck, their efforts were focused on cybersecurity following the 2016 election, when Russian operatives successfully hacked election networks in multiple states. Since then, many states have increased their security protocols and generally moved away from all-electronic voting systems back toward paper ballots.

Those in favor of Democracy Live’s system argue that it is a paper-based system, because when a voter elects to electronically submit their ballot, an election official must print it out before it’s counted.

But most security experts scoff at that concept because the ballot is transmitted via the Internet before it reaches the stage where it’s printed, leaving it potentially vulnerable to cyber manipulation.

“In the computer security business, we worry about worst-case scenarios, and the downside risk of the Democracy Live model is really bad,” said Doug Jones, a computer science professor and election security expert at the University of Iowa. “If the voter is marking the ballot using a device, it’s an online ballot-marking system, and if the physical ballot is not printed by the voter, it’s online voting.”

Still, there are signs that the general public may be becoming more open to the idea. A survey this month by TargetSmart, a data analytics firm that works with Democrats, found that a plurality of voters support Internet voting as a response to the coronavirus crisis.

But advocates of Internet voting technology are clear that they don’t see it stopping with relatively small slices of the electorate such as overseas voters and voters with disabilities, or being restricted to times of crisis. They see it as the future of voting.

Who paper leaves behind 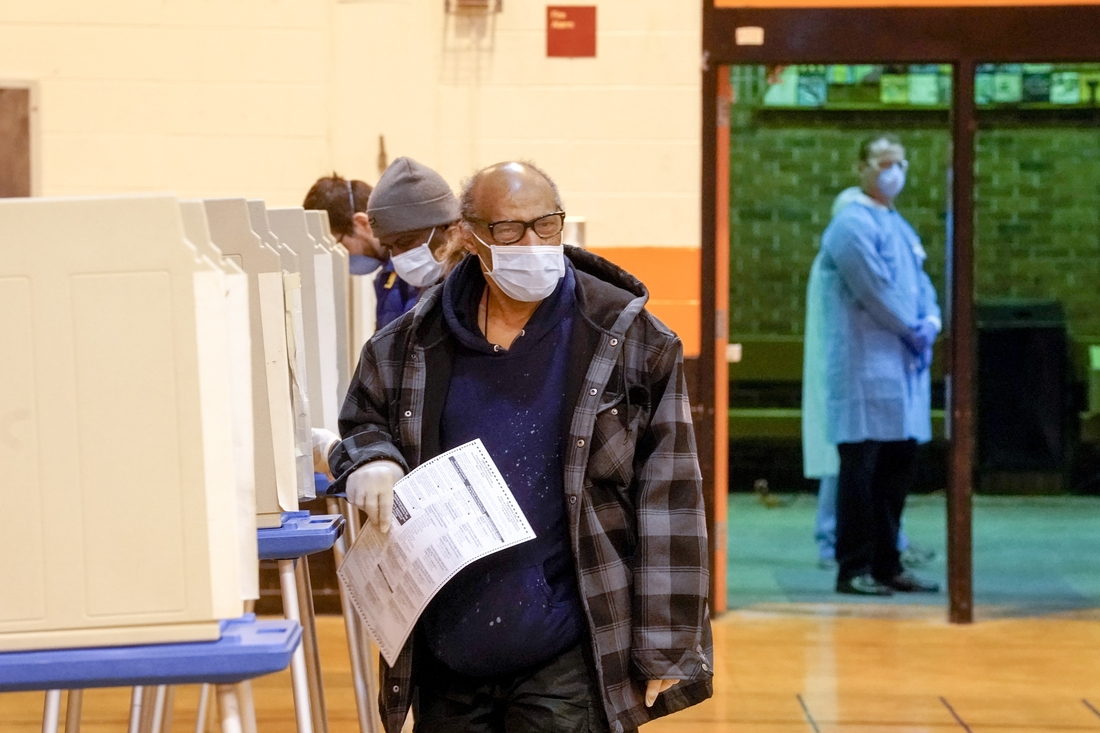 Voters are seen in Milwaukee earlier this month. Eager to avoid making voters use crowded polling places amid a pandemic, states are looking to expand absentee voting while a few are piloting Internet-based voting for some voting populations. 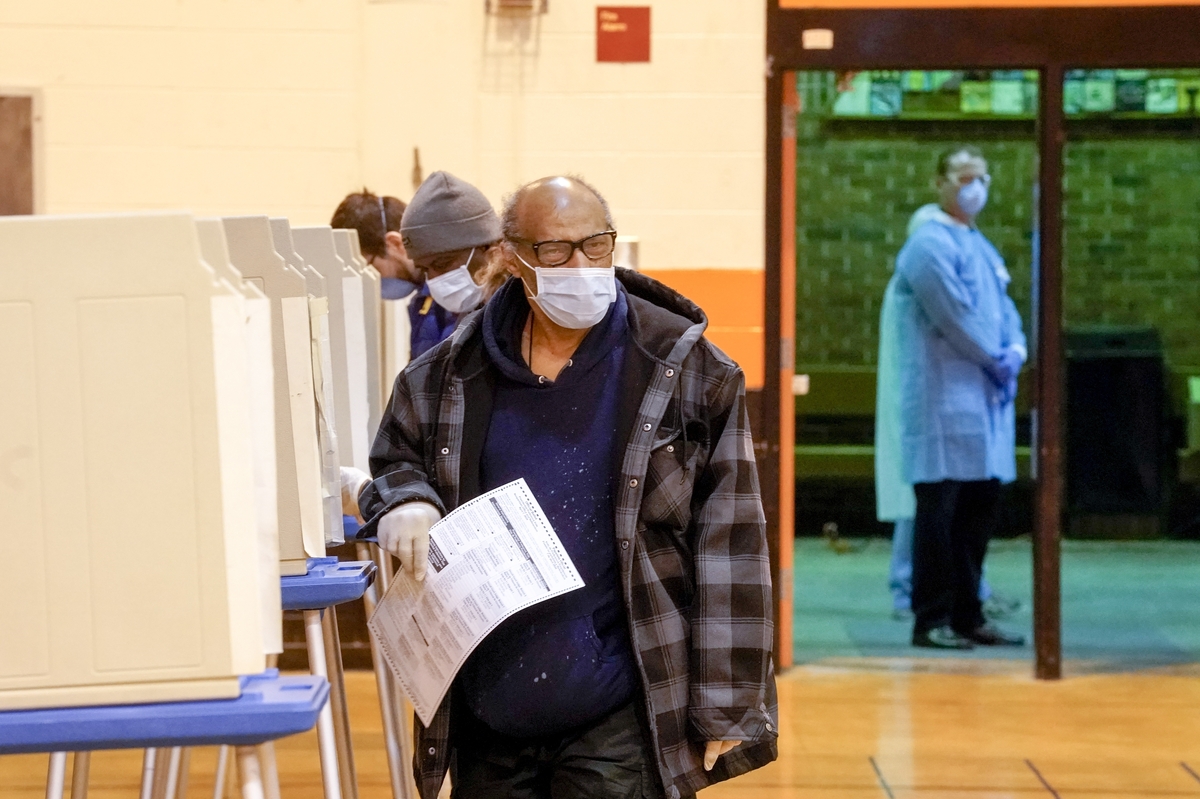 Voters are seen in Milwaukee earlier this month. Eager to avoid making voters use crowded polling places amid a pandemic, states are looking to expand absentee voting while a few are piloting Internet-based voting for some voting populations.

The pandemic took hold in the U.S. in the middle of primary season during a presidential election year. Officials around the country are scrambling with how to make sure the democratic process doesn’t become a casualty.

In response, many jurisdictions and states are looking for alternatives to in-person voting.

While ballots cast by mail are viewed by many as highly accessible, they leave some people behind, says Eric Bridges, the executive director of the American Council of the Blind.

Bridges authored a letter to congressional leaders earlier this month pushing for online voting, which was signed by more than 70 national, state and local disability advocacy groups.

“To complete a paper ballot one is required to, at the least, read standard text, physically write and/or fill in the ballot choices, seal and certify the ballot via a signature on the envelope, and mail the ballot back to the appropriate voting official to be counted,” Bridges wrote. “Each of these steps may act as a barrier to voting for voters who are blind and disabled.”

The Democracy Live system that will be used this summer allows voters with disabilities to access and mark their ballots on their own accessible devices, meaning voters can fill them out without help and send them in using whatever technology suits their specific physical needs. 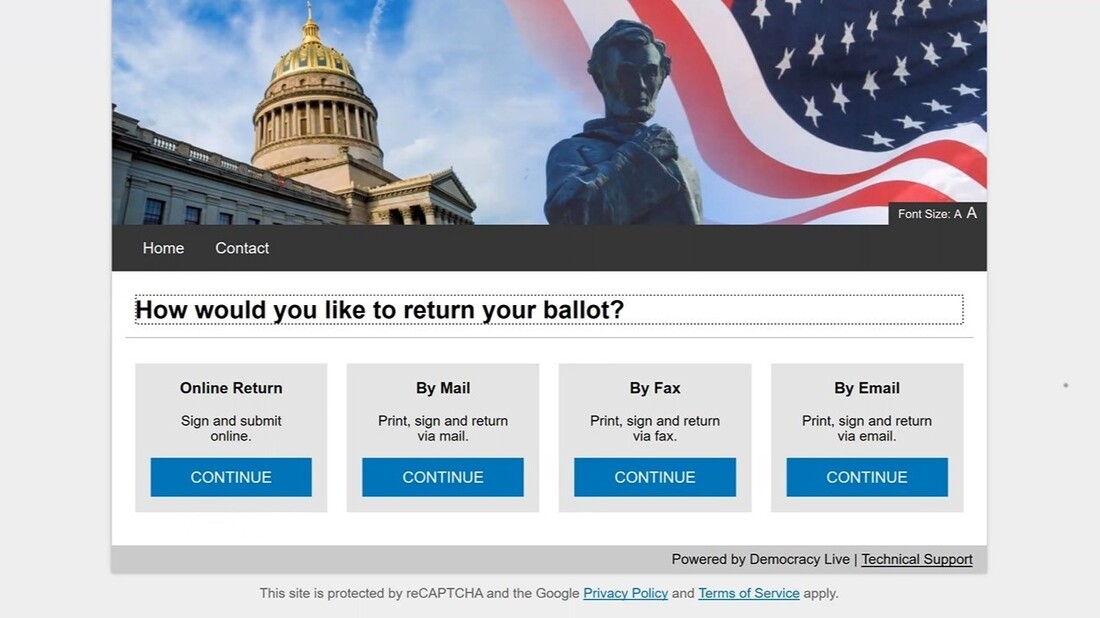 A screenshot of Democracy Live’s electronic ballot delivery service. Once a voter completes their ballot, they can choose whether to return it electronically or print it out and mail it in. 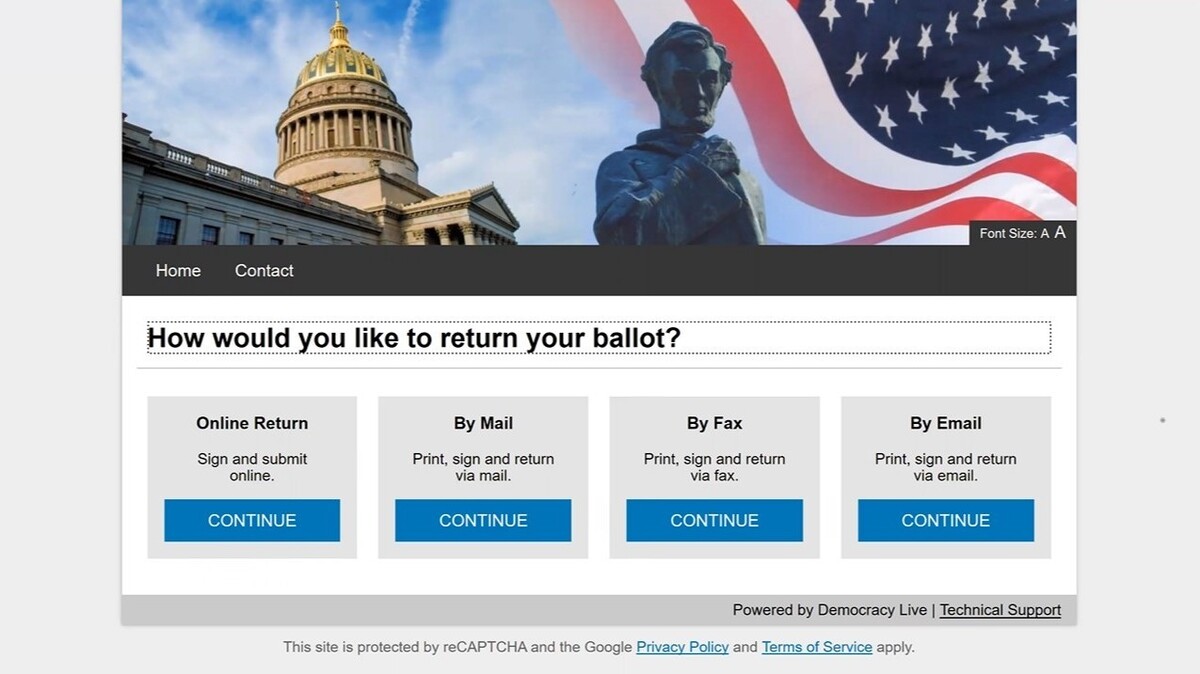 A screenshot of Democracy Live’s electronic ballot delivery service. Once a voter completes their ballot, they can choose whether to return it electronically or print it out and mail it in.

Typically, voters with these sorts of needs have had to travel to a polling place to use an accessible voting machine, but the pandemic may make that difficult this year.

Bridges doesn’t think politicians have purposefully or maliciously failed to take the needs of voters with disabilities into consideration by expanding mail-in voting.

“It doesn’t make it any less frustrating or angering to be completely honest,” Bridges said. “It’s just sort of like we weren’t even considered; there wasn’t even a debate that took place where we could serve and volley.”

When asked about security concerns with the technology, he said that’s not his job, that’s the role of security firms and the government.

“We want access,” Bridges said. “It’s not really up to the American Council of the Blind to ensure that these systems are secure.”

Returning ballots electronically is still in a pilot phase, with the states taking it one election at a time. But Finney said he expects at least five states to offer his company’s ballot return technology to voters with disabilities in November’s general election.

It’s a major development to expand the use of such systems beyond just military and overseas voters, since many of those voters already vote by what are considered insecure methods like email and fax. Disabled voters in many instances will be choosing to electronically transmit their ballot instead of using a completely paper system.

The Democracy Live ballot return system stores a voter’s ballot and then allows an election official to access and print it.

“It’s a loaded term. … Really what this is, is a secure portal. If anything, it’s a document storage application,” Finney said. “When people think of online voting, they’re thinking it’s all being tabulated online.”

But a number of cybersecurity experts disputed that characterization when presented with it by NPR.

“Sorry, but what a load of bull****,” said Joe Kiniry, a principal scientist at Galois, the company contracted by the federal government to develop a secure and open source voting machine.

The phrase “online voting” encompasses any voting system where “voter choices are transmitted over a wide area network,” Kiniry said, and has nothing to do with how those ballots are counted.

“Online voting is not a loaded term,” Kiniry said. “It has a very simple definition that has been widely agreed upon in the research community for about 40 years.”

Cities, counties and states are largely free to use whatever voting technology they want because elections are run at the local level with very limited federal oversight.

In the case of online voting, there’s also very little financial risk. Tusk Philanthropies, a nonprofit funded by multimillionaire Bradley Tusk, is funding many of the pilots with an aim at expanding Internet voting and increasing turnout in U.S. elections. 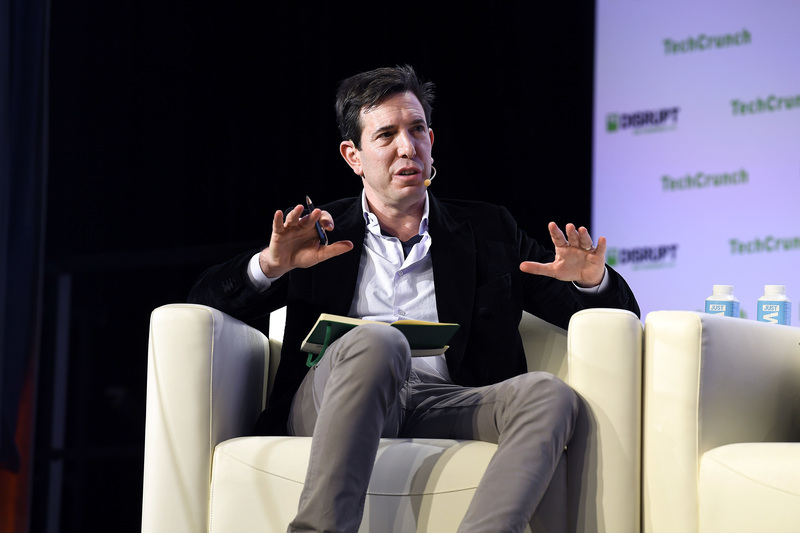 Tusk Ventures founder & CEO Bradley Tusk is funding many of the efforts to introduce online voting. 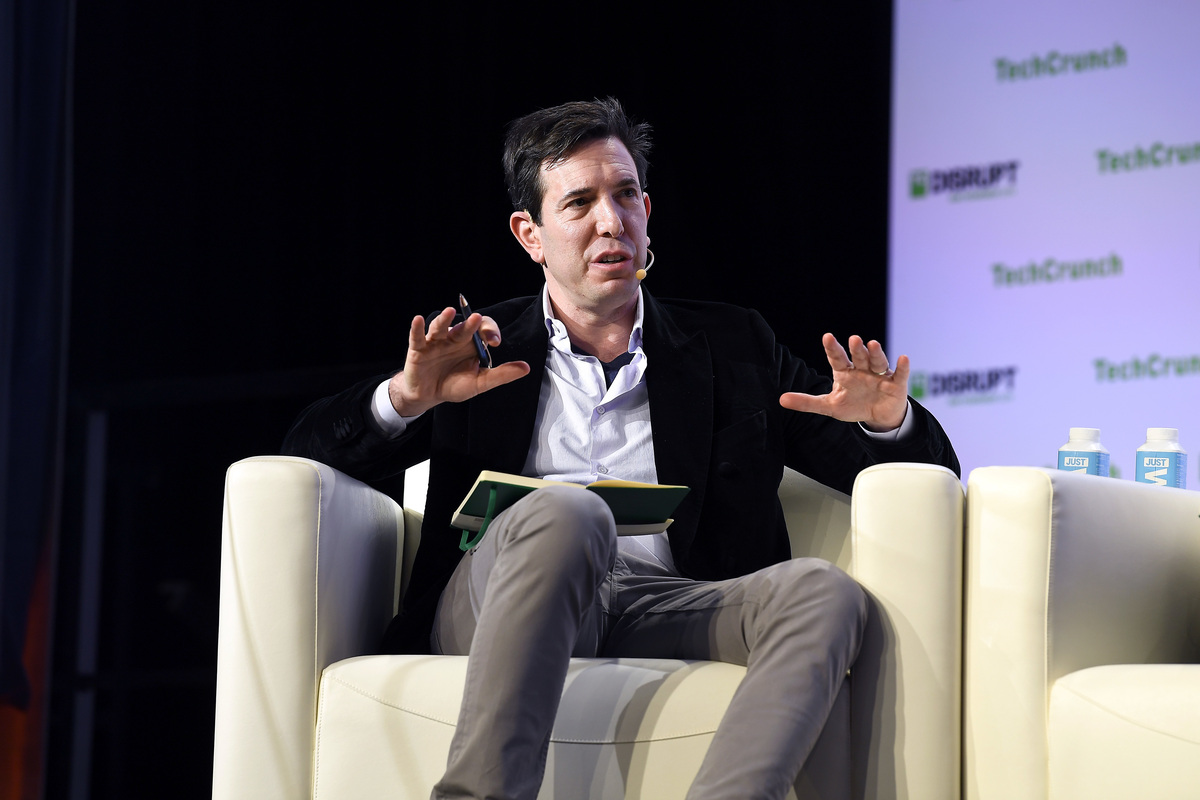 Tusk Ventures founder & CEO Bradley Tusk is funding many of the efforts to introduce online voting.

His organization has funded the West Virginia pilot program and other local pilots in Utah, Oregon, Colorado and Washington.

Tusk told NPR earlier this year that he hopes to fund as many as 50 mobile voting pilots in the coming five years.

“Everyone who doesn’t want this to happen is never going to say, ‘We oppose mobile voting because we don’t want higher turnout,’ ” Tusk said in January. “They’re going to say, ‘It’s not safe.’ And if we have proven 30, 40, 50 times over that it is safe, it’s a lot harder for those objections and arguments to fly.”

Election security experts say that rigorous independent auditing is needed in order to reassure the public the results are legitimate. That’s lacking in the case of Democracy Live, says Sen. Ron Wyden, D-Ore., who has opposed online voting for many years.

Wyden does believe voters with disabilities should have access to software that allows them to mark their own ballot using their own accessible machine, but he thinks those ballots should then be mailed in, not returned electronically.

“It is simply irresponsible to allow online voting, when leading experts have warned specifically that this technology is dangerous and before a system has passed an audit by independent experts,” Wyden said in a statement to NPR. “So far none of these products has passed that test. It is far too risky to gamble the constitutional rights of voters with disabilities on unproven tech.”

West Virginia dropped its previous online voting vendor after a number of independent investigators cited security issues with its system.

Overall, the amount of voters using some form of Internet ballot return in 2020 is still expected to be minuscule; Finney expects less than 10,000 voters nationwide. And he says he doesn’t think the systems should be used more widely until there have been more pilots.

But many election officials say they shouldn’t be used at all. One state election director who requested anonymity in order to speak candidly called the technology “the third rail” of voting systems because they ignite such controversy.

Similarly, Washington Secretary of State Kim Wyman gives two reasons for why she has pushed back for 20 years against various efforts to expand Internet voting.

“The Internet is not secure, and we know this more today than I did 20 years ago,” Wyman says.

The second problem has less to do with technology, but is tougher to solve she says: convincing voters in a close election that the results are legitimate when they don’t understand the underlying technology.

Ahead of a highly polarized presidential election, Wyman says it’s not the time to introduce new technology.