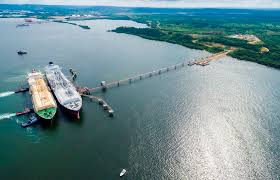 A Panama-based investment firm has submitted plans for a 15.72tn-peso (US$4bn) gas-to-power hub on Colombia’s Caribbean coast, BNamericas has learned.

The project would include an offshore liquefied natural gas (LNG) import terminal and an associated thermoelectric power complex, featuring several combined-cycle plants with individual installed capacity of at least 100MW.

It has been earmarked for the town of San Onofre in Colombia’s northern department of Sucre, around 100km south of Cartagena.

No details were given about how many power plants would be built or their combined installed capacity.

The Colombian government is seeking to boost natural gas investments amid rising local demand for the fossil fuel and dwindling supply.

According to figures published by the mines and energy ministry last week, the lifespan of Colombia’s gas reserves stood at 8.1 years at the end of 2019, down from 9.8 years 12 months earlier.

In addition to efforts aimed at ramping up domestic production, officials hope to launch a bidding process for Colombia’s second LNG regasification plant this year.

Colombia’s only existing LNG import terminal – the SPEC facility in Cartagena – went into service in 2016.

In other permitting news, Invepetrol sought an environmental license for its Pozo Cedrillo 1 well near the town of San Luis de Palenque in eastern Casanare department.

Permitting documents were also submitted by Interconexión Eléctrica (ISA) and Enel Green Power. The former requested to begin the evaluation process for an environmental impact study related to its 220kV El Rio substation and associated power lines in the Caribbean region.

Enel Green Power is seeking an environmental license for a 220kV transmission line linking its Windpeshi wind farm to the Cuestecitas substation in La Guajira.